Free Write Friday #14: The Quest For The Elder Tree 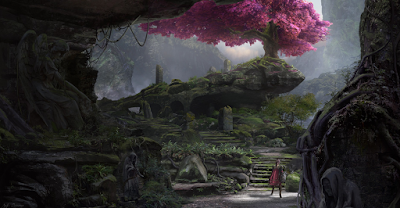 Her father had sent her after the last of her brothers had succumbed to the blight. She remembered the afternoon well:

"Princess Shaleena?" She had been in the library, studying hard, trying to find some scrap of knowledge of the ancient world that might prove to be the salvation they had been looking for. The Royal Library of the Kingdom of Cormant was supposed to be among the most extensive in the known world and she wasn't the first to search the answers and she knew she wouldn't be the last. But with her brothers out, fighting the blight and defending the land against their enemies there were few people to search for answers, so she had taken it upon herself to find them.

It was Deanna, her father's Vizier. "Yes?"

"Your father wants to see you." She remembered putting the book down on the table and following Deanna up to the highest tower where her father waited. She entered alone, Deanna waiting at the door and saw her father's figure on the balcony looking out. She walked across the room to join him, wondering why he had not turned at her entrance. She was about to step out onto the balcony when his voice stopped her.

"Stay there, Shaleena." He turned and she gasped. "Father...  no!" The purple blotch on his face was unmistakable. He nodded. "I'm afraid it's true," he said. "The blight had begun to affect me." He took a deep breath. "I know you're young, younger than I would have hoped before I gave you this quest, but time is against me and we have no other choice."

"Father, I have been looking for answers in the library,  I will redouble my efforts!"

"There is no time for that, child. I know where you must go."

That had been six months ago. First she had to slip behind enemy lines and take ship for the Most Serene Republic of Vascadora and then overland to Great Malantium and through the Mountains of the Eagles to the Great Eastern Forest beyond that. There had been so many false trails and set backs once she had entered the Forest. The dryad clans warred with the wood elves and anyone could get caught in their politics- and she had almost been trapped by their machinations more than once, but the thought of her father and her brothers kept her focused on her goal. Her feet hurt, her sword was caked with the dried blood of her enemies, but she had made it.

The journey had been long, it had been treacherous but just looking at the Elder Tree made it all worth it. She finally reached the top of the stairs and stood looking up at the beautiful pink blossoms that seemed to glitter in the pale light of the valley where the Elder Tree sat. The nectar from these blossoms were the cure to the blight. Whether she could harvest enough nectar to make a difference was another question entirely. "Maybe a cutting?" She said it aloud and it felt like blasphemy- but she really didn't have another choice. Their scientists might be able to reproduce the elixir, but if they couldn't then what was she going to do? She wasn't going to come back here- the journey was too long. She set down her shield and put her sword on top of it and taking the satchel off of her shoulder, set down her bag and reached up to the nearest branch. She had a lot of work to do before she started the long journey back.