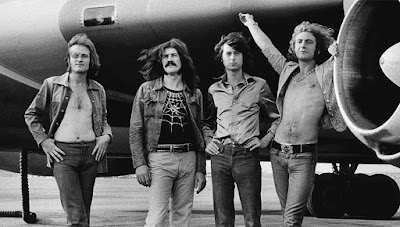 A few months ago, we raided three very large boxes of CDs my parents didn't want and I ended up snagging just about the entire Led Zeppelin discography and then spent the subsequent months listening to all the albums I had and discovering the full depth of the awesomeness of the Greatest Rock N'Roll Band in history. I didn't have their entire discography of studio albums (I was missing Led Zeppelin III and Presence) but between CDs and judicious use of Spotify I managed to make my way through the whole set. Along the way, the secondary question came up: Led Zeppelin has made a lot of long songs over the years (for the purposes of this ranking, I went with any song above seven minutes in length)- which one is the best 'long song'? A lot of people will probably insist on 'Stairway To Heaven'- as you'll see below, I have a slightly different opinion.

1. Led Zeppelin IV
I really wanted to give top slot to Houses of The Holy, but upon further consideration, I think I've gotta give it to IV. This truly is Led Zeppelin at the height of their powers-- Led Zeps I-III have built up to this and it's so good from top to bottom.

3. Led Zeppelin III
One of the albums that I had the least knowledge about, III is an overlooked gem of an album.

4. Physical Graffiti
Double album. 'Kashmir' 'In My Time of Dying.' What's not to like?

7. Presence
Kind of an odd one out in the bunch, but it has 'Achilles Last Stand' so that means I can't put it on the bottom.

8. In Through The Out Door

1. Achilles Last Stand
Hands down winner. It's not even close- probably because I'm so nerdy about The Illiad, but the song transports you to those dusty plains of Troy and you see Achilles facing down Paris before going down with an arrow in his achilles tendon.

3. When The Levee Breaks

4. How Many More Times

9. Since I've Been Loving You