This Week In Vexillology #292

July 27, 2019
Well, after a break last week we're going to jump back in with both feet and dip back into the Lost Archives for a double shot of flags from North Africa: Algeria and Libya. First up, Algeria: 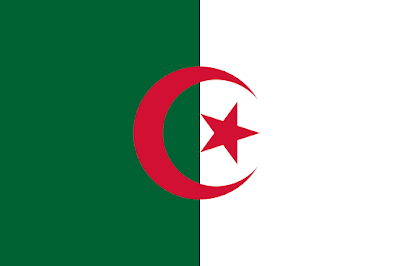 Adopted on July 3rd, 1962 as the national flag, civil and state ensign, the flag of Algeria doesn't really have a lot of deep symbolism embedded in it. Literally the only thing I could find for a solid description of symbolism: "The crescent, star, and color green are traditional symbols of Islam (the state religion.)" So while the symbolism is pretty easy to explain, the history of the region digs up some interesting tidbits. For instance, while the crescent and star have been associated with Islam for centuries- in Algeria's case, the Barbary pirates of the region have been using flags with one or more crescents dating back to the Kingdom of Tlemecen in the 1200s. So, as a design element the crescent has been showing up on or off in flags for Algeria for centuries. Plus, pirates used them- like, genuine real-life bad ass pirates. So that's cool.

The exact parameters of the flag have been set down to the last details and are worth quoting, because if there's one thing about flags that always kind astonishes me, it's the level of detail that goes into their design:

Now, that's an impressive level of detail. Next up, Libya: 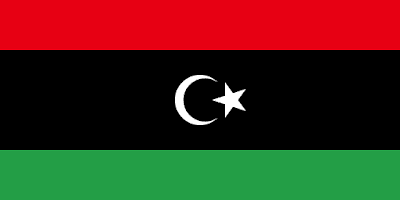 Don't call it a comeback, but after being replaced by the ultra-boring plain green square of the Qaddaffi regime, the flag of the Kingdom of Libya came back on August 3rd, 2011 after his regime fell 60 years after it was first adopted in 1951.

(Just as a minor tangent: The Kingdom of Libya had some interesting structures to it-- it was a Federal monarchy, which consisted of the three regions of Cyrenaica, Fezzan and Tripolitania which were unified into Libya. Unsurprisingly, the King had a lot power in the system, but the Senate had eight representatives from the three provinces and the capitol alternated between Tripoli and Benghazi, which makes sense given the importance of those two cities in the country, but it's also interesting.)

There's actually an origin story for this flag! Omar Faiek Shennib, Chief of the Royal Diwans, Vice President of the National Assembly and Minister of Defense under King Idris presented the proposal to Libyan National Constitutional Convention. He informed the convention that the King approved the design and they followed suit. The wiki-page also has the following quote, source unknown explaining the symbolism of the flag:


"The crescent is symbolic of the beginning of the lunar month according to the Muslim calendar. It brings back to our minds the story of Hijira [migration] of our Prophet Mohammed from his home in order to spread Islam and teach the principles of right and curtie. The Star represents our smiling hope, the beauty of aim and object and the light of our belief in God, in our country, it's dignity and honor which illuminate our way to puts an end to darkness."

Red was selected for the blood sacrificed for the freedom of Libya, black to remember the dark days that Libyans lived under Italian occupation and green to represent it's primary wealth- agriculture and the future prosperity of the country. And that's Libya.

And that's Algeria and Libya! Remember, until next time keep your flags flying- FREAK or otherwise!