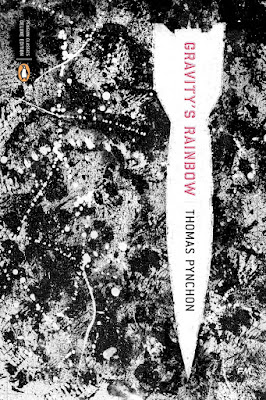 Well, I did it. After several fits and starts, I finally settled down in January of 2018 and determined that I was going to crack this book wide open and I finally, after over a year of inching my way through it, finished Gravity's Rainbow.

I have no idea where to start with this book. It was frustrating, maddening, beautiful, genius, incomprehensible and rage inducing- sometimes, all in the space of a single page. Am I entirely sure I understood the plot? Well- to answer that question, I think you'd have to be entirely sure there was a plot- at least a conventionally structured one and I'm not sure of that. All that I'm left with if the nagging feeling that I read over seven hundred pages of either a work of staggering genius or complete gibberish and I have no idea which it was.

The first part of the novel is the part that problem made the most sense to me and was the easiest to follow-- basically, it opens with Pirate Prentice awakening after a dream (and man, the transition between the dream and waking up is insanely well done. Like staggeringly beautiful use of language. So subtle. So powerful--which is probably what hooked me into the first page) and getting breakfast in his house in wartime London. Turns out he and his colleagues are tracking the sexual encounters of a U.S. Army Lt. Tyrone Slothrop, who's sexual exploits seem to precede a V-2 rocket strike in the same place by several days. A top secret psychological warfare agency named PISCES is investigating him. I won't really waste a lot of time trying to keep track of the characters- and to be honest, neither should you since there are a whopping 400 named characters in the entire book.

Pavlovian conditioning is explored. Mind control is touched on. Katje and Gottfried are introduced early on- the former a Dutch double agent who infiltrated a V2 site only to find herself captured and turned into a sex slave (along with Gottfried) by the commander of the site, a sadistic officer named Captain Blicero. Speaking of Pavlovian conditioning: an octopus named Grigori is trained to attack Katje on sight.

Confused yet? Oh wait: it gets better. Part two opens with Slothrop sent away to the liberated French Riveria, where he is on hand to save Katje from the octopus and then sleep with her. At the casino, he also learns of a mysterious rocket with a weird serial number of all zeros and a component called S-Gerat made out of a plastic known as Imipolex-G.

And it's all downhill from there as Slothrop flees the casino- suspecting that he's being monitored and goes on a long, complicated and increasingly strange journey across newly liberated and destroyed Europe- known as the Zone. He encounters a fictional band of African rocket technicians who are survivors of the 1904 Herero Genocide. He makes his way to the Anubis, a pleasure yacht full of European aristocrats who are sexual liberated and has an affair with a former pornographic actress, Margherita and her daughter Bianca and he learns more about the strange rocket, but when he returns to the Anubis, Bianca is dead and his personality starts flying apart. The book culminates in the launch of the rocket and we learn that Blicero is launching it as an act of pseudo-sexual sacrifice with Gottfried bound inside the S:Gerat device, which is an attachment design to entomb a human on the rocket. The text cuts off in the middle of a song composed by an ancestor of Slothrop right as the rocket is about to land.

Overall: like I said, either it's complete gibberish or staggering genius and I'm still not sure which it is-- it's packed with symbolism- the obvious notion of the phallic nature of rockets is a thread that runs throughout the book- there's shades of the Cold War just beginning, where rockets hang over the head of civilization as the specter of nuclear destruction is ever present. The structure of the story itself sort of follows the arc of the rocket as well with Slothrop's personality eventually detonating, much like a rocket does after it lands. But it was also an incredibly mind-numbing and difficult book to read (despite spawning a lot of pop culture influences)  and so My Grade: ** out of ****