This Week In Vexillology #291: Some Thoughts On The Betsy Ross Flag 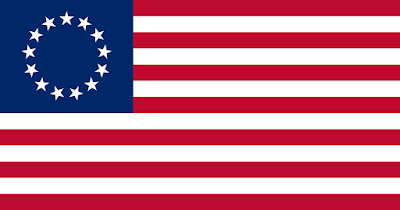 So, this flag is officially problematic in some quarters now and since we're back and we missed the usual July 4th and Flag Day Specials, we might as well jump back into things with both feet and unpack some stuff about the Betsy Ross Flag.

The origin story of our flag is one of our Great National Myths and to be honest, it's still kind of controversial in parts. Generally speaking, most scholars and vexillologists don't agree with the usual story of a lady in a bonnet filled with the fire American Revolutionary Zeal staying up by candle light to hand stitch the very first version of the Stars and Stripes. The truth is a lot more complex and complicated than that- even though it's a great story and it's easy to see how it became some intertwined into our foundational mythology as a country.

The story in question was started in 1870 by the grandson of Ross, Willian J. Canby who presented a paper to the Pennsylvania Historical Society claiming that his grandmother had made the first flag with her very own hands. Wikipedia continues:


In his account, the original flag was made in June 1776, when a small committee, including George Washington, Robert Morris and relative George Ross-visited Betsy and discussed the need for a new American flag. Betsy accepted the job to manufacture the flag, altering the committee's design by replacing the six-pointed stars with five-pointed stars. Canby dates the historic episode based on Washington's journey to Philadelphia, in late spring 1776, a year before Congress passed the Flag Act.

So, even if you don't want to go all in on this story-- and the evidence is somewhat sketchy about it being the one true origin story, you have to give Betsy Ross some credit: replacing the six pointed stars with five pointed ones is a legitimately important design decision for the American flag that's last through to this day. The problem is that there were a lot of flag makers in Philadelphia at the time, and, as Ross was an upholsterer, a request to sew a flag couldn't have been all that unusual.

It's a bit of a historical conundrum for people, because by all accounts while you can't definitively disprove Canby's account, the evidence that exists to support isn't well documented. The first documented meeting or discussion about a flag was in 1777 with The Flag Resolution. First documented usage wasn't until 1792. There's just not a lot in the historical record to back up the Canby account. In all likelihood a whole bunch of people made this flag, not just Betsy Ross. Give her props and all due credit for changing the stars from six pointed to five pointed ones- there seems to be plenty of evidence back that up, but other than that, she was one of many. (And, really, I like that, after all: E Pluribus Unum means, 'out of many, one.' So out of many designers, we got one flag. That works quite nicely, thank you very much.)

The other interesting tidbit I leared was that The Flag Resolution of 1777 was amended again in 1794 and finally in 1818 where it's more or less stood today: but here's the kicker-- there's nothing I can find indicating how the stars have to be arranged. As we've added states, the configuration has shifted somewhat over the years, but even now there's no rule saying we can't have fifty stars in a circle. It just might look funny.

Which bring us back around to the controversy of it all: the sneakers. In general, I don't really care. Nikes are overpriced and if I own any, it's only because they were on sale at the time. Everyone shouting at each other is more than entitled to their opinions about this mess- because after all, this is America. But I do have some problems with this whole controversy:

First of all, let us consider that the Internet Outrage Machine is now so predictable and so easy to manipulate that companies can use it to boost their stock price. I'm not saying that's what happened here, but given the fact that Nike stock went up in the wake of this, somebody is making money off of our clicks and rage-filled Tweets and whoever's making the money, it's probably not us.

Second of all, the accusation that the flag has been 'co-opted' by White Supremacists doesn't seem to hold much water. The ADL says 'that's not a thing' and in general, I agree with their analysis. It has been used now and again by the usual suspects over the years- but the ties between anti-government militias and straight up white supremacists seem to be weak at best. And even if they weren't weak at best, as Americans we cannot stand by and let hate groups co-opt one of our revolutionary flags. We shouldn't let any of the Revolutionary Flags be co-opted by anyone. They belong to all of us. So yes, I think hippies and liberals should fly the Gadsden Flag. I think Conservatives should fly the Pine Tree Flag. I think everybody should fly the Betsy Ross Flag. Every American should have at least one of the historical Revolutionary Flags and fly it whenever they feel like it. Hate groups don't get to steal symbols that belong to all of us, so if they try-- then take them back.

Finally, I have to take issue with some of the historical analysis floating around this controversy. This isn't an attempt on my part to minimize the historical trauma of slavery-- I'm a first generation immigrant from a pretty white European country. My lived experience with American history dates from the mid-80s and everything I learned in high school and beyond in various history books. But what I do think is that the Founders, whatever their faults, realized immediately that they had to begin the work of living up to the ideals they laid down in the Constitution and the Declaration of Independence, otherwise the Revolution they fought for would  be nothing but words.

Yes, the Betsy Ross Flag flew when slavery was still alive and well in the United States of America. But what's missing from that discussion is that the work of ending slavery began before we were even freed from Britain. That's not to imply that folks somehow deserve extra credit for that, but it underlines the point- it's sappy and perhaps a little idealistic to put into words, but before that day in July in 1776, no other country had charged it's own ciizenry with the task of building a more perfect union and given them the tools to do so with our ability to amend the Constitution. The work of building that more perfect union started immediately. We have come so far since then as a nation, but along the way we seem to have forgotten that a better nation for everyone or every creed, color, orientation and gender, doesn't emerge out of thin air. It's on all of us to work toward that- after all, E Pluribus Unum: out of the work of all us, we can make that more perfect union.