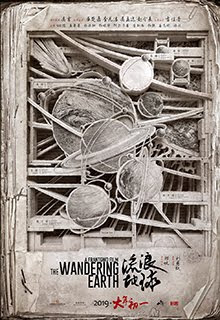 I read the novella, so naturally, when Netflix grabbed the movie, I sat down to watch that as well- albeit with a certain amount of trepidation- the novella is epic storytelling in every sense of the word and even with a huge budget and all the movie making magic you could hope for, this would be a difficult story to do well- but as it turns out, not only did they do it well, they absolutely nailed it.

In the year 2061, the sun has aged and is about tot urn into a red giant, which poses something of a problem for Earth, as they don't want to be destroyed in the process. The nations of the world consolidate into a United Earth Government and start constructing giant Earth engines to move the planet out of the current solar system. Humanity's population is severely reduced as catastrophic tides sweep the planet as the engines stop Earth's rotation and as the planet moves away from the sun, the surface freezes and the rest of the population moves into vast underground cities.

At the beginning of the story, Liu Peiquiang, a Chinese taikonaut bound for the vast space station that controls the navigation of the planet and leads it along it's chosen flight path, hands over guardianship of his son to his father-in-law Han Ziang. Seventeen years later, his mission is about to end and his now adult son Liu Qi sneaks off with his adopted sister Han Duoduo to take a trip to the surface to see what it's really like- they steal Han Ziang's clearance as a trucker in order to do so. Eventually, they get caught and arrested and are joined by a fellow prisoner named Tim and eventually their grandfather Han Ziang himself is arrested when he attempt so unsuccessfully bribe a prison guard.

As Earth passes by Jupiter to get a gravity assist to boost them out of them of the solar system, a gravitational spike causes earthquakes that disable many thrusters and engines across the planet and threaten to send Earth crashing into Jupiter. In the chaos, the four prisoners escape and try and get out in Han Ziang's truck, but it gets diverted by a military rescue mission who need to transport a lighter core to restart the planetary engine in Hangzhou. While driving through the ruins of Shanghai, another earthquake strikes and the lighter core and Han Ziang are lost. Everything seems lost, until they find a new vehicle where an engineer convinces them that if they can repair the engine in Sulawesi, they could potentially make a flare bright enough to ignite the atmosphere of Jupiter and push Earth away from it's impending collision with the planet.

Meanwhile Liu Peiqiang, on the verge of returning home to his family, watches all of this in horror and tries to do something, only to be overriden by MOSS the artificial intelligence commanding the station, who believes that the space station needs to escape to preserve the archives and DNA samples humanity sent to the space station. With the assistance of Russian cosmonaut Makarov, Liu gets to the control room, but is locked out of everything due to his actions.

Back on Earth, the others arrive at Sulawesi and found the engine already restored and manage to concentrate the engine to push the engine beam high- but not high enough to ignite Jupiter's hydrogen. Seeing this, Liu Peiqiang persuades the Earth government to give him control of the space station so he can ignite the fuel to give the beam the extra length it needs to complete their objective. Peiqiang sacrifices himself. Jupiter ignites. Earth is thrown clear and continues on it's long journey into the night.

Overall: I think it's safe to say that Hollywood no longer has a monopoly on the big budget blockbuster- if it ever had one in the first place that is. The Wandering Earth is an excellent translation of the novella and it feels like it could stand shoulder to shoulder with movies like Deep Impact or Armageddon. The lack of anything remotely American is refreshing as well. If you liked the novella, you'll love the movie- and hell, even if you just love big budget science fiction blockbusters you'll love this as well. My Grade: **** out of ****