This Week In Vexillology #284

March 09, 2019
This Week In Vexillology is back and we're heading north for our tour of the counties of England-- this week we're going right up to the border with Scotland to take a look at the flags of Northumberland and Durham.

First up, Northumberland. How do you get there? Well...  there's a 'north' in the name for a reason- if you head all the way up to the north of England, past Leeds and Bradford all the way up to Newcastle and go directly northwest of that and you're more or less in the county proper. (I've got a book in my queue that deals with the history of the borderlands and the Border Reivers that ran in the area of Northumberland...  don't know if the Nixon Clan ran in that part of the border, but the whole place is sort of on a 'bucket list' to potentially visit when we next back to the UK.) 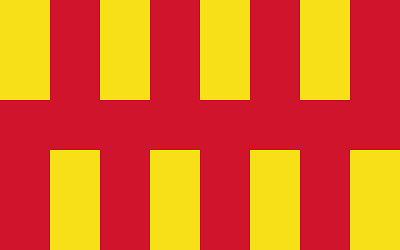 This is a flag of the historical county of Northumberland-- it's the banner of arms of the County Council. The arms of the county council were granted in 1951 but the flag wasn't registered with the Flag Institute until 1995. The exact origin of the arms was seems to be somewhat murky. They were originally attributed to the ancient kingdom of Bernicia. But weirdly, the wiki-page for the flag says that the arms were 'fictional' but inspired by Bede's description of a flag used on the tomb of St. Oswald in the 7th Century.

Overall, I like it. The colors are bright and the design is striking...  it also comes with a guideline: top corner, nearest the flagpole should be gold.

Next up, County Durham. How do you get there? Well it's actually pretty easy... south of Newcastle, north of Middlesbrough, you'll find the city of Durham- the county itself runs between Sunderland and Hartlepool on the coast and sort of juts inland to the North Pennines Area of Outstanding Natural Beauty. 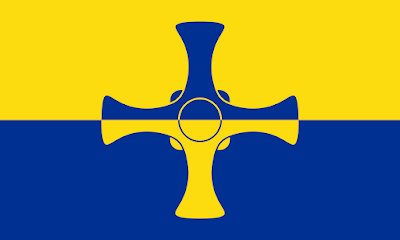 Registered with the Flag Institute in 2013 after an online competition to create a flag of the county. Chosen from six finalists, the winners were twins Katie and Holly Moffatt and their dad James Moffat- which is kind of a nice family story. The flag features the Cross of St. Cuthbert counterchanged in the the county colors of blue and gold. One of the early Celtic Saints, St. Cuthbert's tomb is located in Durham Cathedral- hence, his association with the county.

I always love counterchanged flag designs and County Durham has a particularly striking one- I love the combination of blue and gold and the contrast with neighboring Northumberland and their bright colors of red and gold is quite nice.

So there you have it- the next two flags in our tour of the counties of England. Remember, until next time keep your flags flying- FREAK or otherwise!