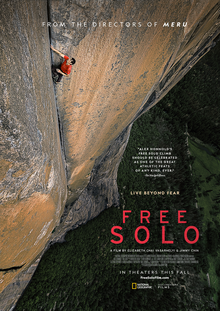 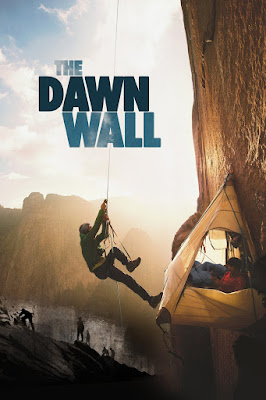 Not really competing documentaries, but certain adjacent documentaries Free Solo (on Hulu) and The Dawn Wall (on Netflix) celebrate two monumental achievements in the world of climbing that took place over the course of the last three to five years. Climbing has always fascinated me. I've never seen the movie Cliffhanger, but that image of Stallone hanging off the cliff stuck in my brain as a kid and I seem to remember making up a game on the playground based off of it. I also enjoyed the hell out of Vertical Limit.. So documentaries about what climbing is actually like and actually involves are something I can get behind.

I was far more familiar with Free Solo than I was with The Dawn Wall. I remember reading the news coverage that followed Alex Honnold's achievement of climbing El Capitan without a rope and I was even more excited for a documentary so we could see it happen close up- and when I saw that the documentary had landed on Hulu, I more or less watched it immediately. The filmmakers do an excellent job of illustrating the scale of El Captain at various key moments throughout the film- just when you're thinking that it doesn't look that bad, then they zoom out and you realize just how big El Capitan actually is and just how small Honnold trying to climb it- and it takes you breath away.

The first part of the documentary is sort of you thinking, 'he's not actually going to do this, is he? This would be crazy?' and for sure, the success of the climb has to be largely due to the incredible about of preparation and practice that Honnold put in before making the attempt. He tested out every part of his chosen route before he tried it. He did some practice climbs in Zion National Park and in Morocco. I would say if there's an overarching theme between these documentaries it's probably that of obsession. Both Honnold and his counterpart in The Dawn Wall, Tommy Caldwell (who actually appears in Free Solo, helping Honnold to prepare for his climb) is that they're both more or less obsessed with climbing and until they either conquer The Dawn Wall or free solo El Capitan, they'll never be truly satisfied. Between the two, Honnold comes across as the more single minded of the two.

The actual climb is tense, silent and by the end my palms were starting to sweat-- even though you know that Honnold succeeds, just the idea of it- the idea of being wedged into a crack of granite that high off the ground where the slightest slip could be the difference between life and death. It only adds to the craziness and the immensity of the achievement.

In contrast, The Dawn Wall is more of technical problem that Tommy Caldwell and his partner Kevin Jorgenson have to solve. Essentially a sheer face of granite that had never been climbed before, the two climbers spend six years studying possible routes and mapping them out before making the actual attempt. Caldwell has something of an interesting back story: he became a relatively young climbing prodigy and was actually held hostage on a climbing trip in Kyrgyzstan for six days before seeing an opportunity to push their final and sole captor off of a cliff in order to escape.

You get the sensation that conquering The Dawn Wall is Caldwell's attempt to exorcise some ghosts of that- but at the same time, there's more of a puzzle aspect to it that's fascinating. They know that there are multiple possible routes up the wall, but they have to find them and join them together in one route. The ascent itself, when it begins involves Caldwell and Jorgenson taking it one pitch at a time and they take turns going, so that they each have to complete each section of the route for it to 'count.' Everything seems to proceed according to plan until Pitch 15, where Caldwell succeeds and try as he might, Jorgensen can't seem to crack it. Eventually, Caldwell decides to push on with Jorgensen taking on a support role as the media coverage of the attempt increases- but ultimately, Caldwell decides that if they're going to do this, he wants to get Jorgensen past that Pitch and caught up with him so they can make the top together.

When Jorgensen finally does crack the pitch, it's one of the most beautiful redemptive moments in the entire film. After he cracks that, the two of them fly up the rest and conquer The Dawn Wall together, solving a six year puzzle at last.

Overall: both are fascinating stories about something I knew very little about, but I feel like the promise and peril of doing the impossible is paid for by the ceaseless obsession these climbers show with getting the job done. But maybe that's the lesson here: to do impossible things, you've got to be obsessed and there aren't that many people who are willing to do that. My Grades: Free Solo, **** out of **** and The Dawn Wall, **** out of ****