Bookshot #117: Conversation In The Cathedral 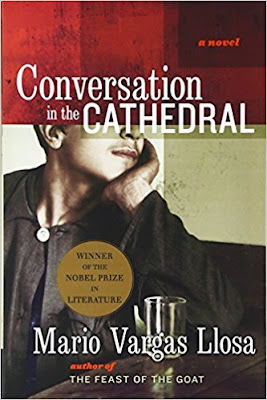 At this point, I don't really know what else I can say about Mario Vargas Llosa. Every book of his I've ever read has been powerful, incredible and straight up amazing. It's been awhile since I've read any Gabriel Garcia Marquez, Jorge Amado or Isabel Allende- and I still need to sit down and read more of Jorge Luis Borges- but Vargas Llosa belongs with the best of them- if for no other reason than his novels make you learn things you didn't necessarily know before. (Especially about the history of Latin America.)

Another thought I've had: I wonder what his novels would be like in Spanish? I might actually have to sit down and attempt one of his books in his native language just to try and see if his writing style comes across in a different way.

So: Conversation In The Cathedral. Set in 1950s Peru, this book rather elegantly states the question that the characters ponder throughout the course of the book: "At what precise moment had Peru fucked itself up?" The two main characters are Santiago and Ambrosio, who have a chance meeting in Lima one day when Santiago is chasing a story and he finds his father's former Chauffeur, Ambrosio, working for the dog pound. Heading over to a local water hole known as The Cathedral, the two of them have a few drinks and catch up, each of them pondering what had gone wrong with their lives.

Santiago is the black sheep of a rich family, working at a tabloid newspaper and rejecting his families wealth. In University, he had flirted with the Communist Party- mainly because he was interested in a fellow classmate of his, Aida- but after a student strike/uprising is put down by the regime, his interest in radical politics wanes and is soon abandoned. His father is a Senator and regime ally, Don Fermin who longs for Santiago to stop his rebellion and come back to go to law school so he can take over the family business- but it's his father's potential involvement in the murder of a notorious prostitute and mistress of a powerful regime ally that really sparks the story to life, especially when it comes to Ambrosio.

Ambrosio, as it turns out knows more about the murder than he wants to admit and he tells Santiago his story and how his life more or less lead him first away from Lima, with a wife and a child and then back to Lima without them after his wife died and he more or less abandons his child/leaves her with their land lady out in the country.

If the disillusionment both men feel at the state of their country wasn't the point of the book, the ending would feel somewhat unsatisfying- but in as it's set in 1950s Peru, a period of political and societal stagnation and malaise (at least that's what I took away from this book- I'm not finding much out in the interwebs that would disagree with that assessment) the disillusionment is the point. The ending works. It's melancholy and not particularly happy, but it fits. Life can be nothing but a series of unfortunate tragedies many of which can mean next to nothing at all for a lot of people. It's far too easy to be disillusioned by everything.

Vargas Llosa's style is somewhat difficult to wrap your head around at first. It seems very jumbled at first- with dialogue shifting from one character to another one conversation to another, but the deeper you get into the book, clarity emerges and you begin to see the stories of Santiago and Ambrosio swing into focus. His style is sort of what makes me wonder about how these novels read in Spanish- it'd be interesting to see if there are nuances and aspects to his style that are different in his native language than in English- it sure seems like that would be the case, just because of translation, but how much is lost in translation would be interesting to find out too.

Overall: a melancholy and powerful glimpse into the history of Peru, Mario Vargas Llosa proves yet again why he's one of the best writers in the world. I'd probably slot Conversations In The Cathedral in between Feast of the Goat and The War of The End of The World-- the former was more accessible and the latter considerably more dense, though both were amazing books. His style takes some getting used too, but what's nice about this book is that the more you read, the clearer everything becomes- it's like lifting a curtain, slowly. My Grade: **** out of ****