This Week In Vexillology #279

January 12, 2019
Our grand tour of the counties of England continues with our next two counties up- we're heading back east across England to my home county of Cambridgeshire and it's next door neighbor of Suffolk!

I was born in Cambridge, but I can't say that I have a particularly close relationship with my birthplace- it's not like I get back there a lot. But that being said, I'd like to get back there and get to know the place of my birth a bit better. I've done the usual things- the wandering through the colleges, punting on the river, etc- but if there's a 'someday, maybe' on my list, it'd be to spend a few months there and actual live there for awhile to see what the place is really like. In the mean time, my home county has a great motto: Corde Uno Sapientes Simus, "With one heart let us be wise."

How do you get there? I've always perceived Cambridge as being north east of London, but it's more straight north. Cambridgeshire itself is in the Fens and is more or less between Bury St. Edmunds, Bedford and Peterborough. Bonus historical fact: Oliver Cromwell was born at Huntingdon.

What about the flag? Well it was registered on February 1st of 2015 with the Flag Institute...  the three crowns represent East Anglia, which is the historical region of Cambridgeshire. The wavy lines represent the River Cam and the shade of blue associated with Cambridge University. 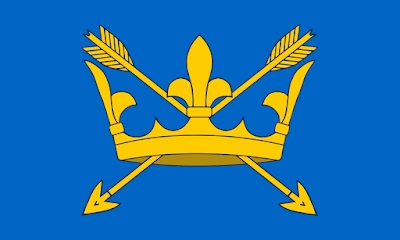 Registered with the flag institute on October of 2017 and it's a design of the banner of arms of Saint Edmund which features with two gold arrows passing through a gold crown. The crown is a Saxon crown for the martyred Saxon King and has been featured as a symbol of his for centuries.

And those are the flags of Suffolk and Cambridgeshire!