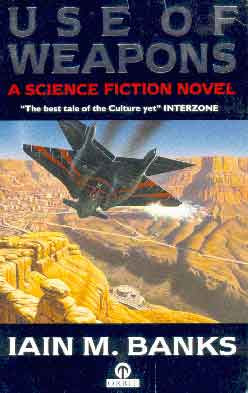 Iain M. Banks is rapidly becoming one of my favorite authors full stop. I know a lot of people who hear the words 'science fiction' and get immediately turned off, but if you need to be convinced of the foolish notion that genre fiction somehow isn't 'good writing' or 'real literature' then you need to get yourself to an Iain M. Banks novel and read it. Stat. The ending of Consider Phlebas sat with me for days and the end of Use of Weapons literally made me drop my phone.

Before we get into the plot, we've got to touch on the structure first. This book is made up of two sets of alternating chapters- one set, numbered with English numbers (One, Two, etc) moves forward from the start of the book while the other, numbered with Roman numerals moves backward from the start of the book (XIII, XII, etc) both of which tie together in the brilliant ending to this novel- which seems absolutely crazy, but it works and more to the point, it works really really well- which I think speaks to the overall talent of Mr. Banks in writing this book.

The forward moving set of chapters deals with the attempts of Diziet Sma and a drone named Skaffen-Amtiskaw who have to locate and then persuade an old Culture Agent by the name of Cheradenine Zakalwe to come out of retirement to take another job. He has to find and make contact with an old colleague named Beychae in a politically unstable star system to further the aims of the Culture in that region. In payment, he wants to the location of a woman named Livueta.

The backward moving set describes earlier jobs that Zakalwe performed for the Culture before returning to his pre-Culture childhood where he lived with his two sisters and a boy around his age named Elethiomel, whose father has been locked up for treason.

As the both sets of the narrative reach their conclusion, the reader finally learns that the two boys commanded opposing armies in a bloody civil war on their planet and Elethiomel took one of Zakalwe's sister's hostage before killing her and having her bones and skin made into a chair and sent to Zakalwe, who attempted suicide upon receiving the chair.

Back in the present, Zakalwe extract Beychae and Diziet and Skaffen-Amtiskaw hold up their end of the bargain and taken him to the planet where the mysterious woman named Livueta lives. She reveals the truth about Zakalwe and completes the story- or so we think.There's a prologue and an epilogue that follow both stories- but they follow one after another, so it's unclear where they land in the chronology of the narrative sets.

Look, I'll be totally honest with the above summary: there's a few important details to have to hold back otherwise you'll spoil the entire book and this book is so good I don't want to spoil for anyone- and for real: I'm going to say this again and again and again: if you haven't picked up a book by Iain M. Banks yet, then what are you waiting for? This one is amazing. The structure, though confusing at first, pays off brilliantly at the end of the book and, as you usually find, Banks doesn't shy away from the exploration of deep themes and the Culture's role in development of the planet that Zakalwe is sent to to retrieve Beychae.