This Week In Vexillology #278

January 05, 2019
Our tour of the counties of England continues this week- we're staying up in Midlands as we make our way back across England to the east. Our next two counties up? Warwickshire and Northamptonshire. Let's talk about Warwickshire first:

Unlike last week's counties Worcestershire and Herefordshire, there doesn't appear to be any one product or tradition that Warwickshire is known for. It's got Warwick Castle and Royal Leamington Spa, I guess...  that counts for a lot. In terms of where it is, well, if you find Coventry on the map head south you'll be in Warwickshire. The county actual stretches up and around Coventry- which used to be smack dab into the county until it became it's own metropolitan area. Here's what it's got going on for a flag: 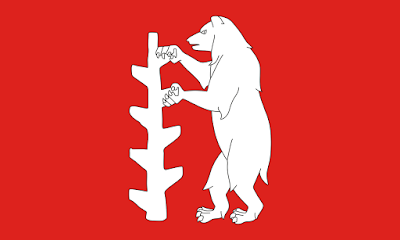 Well, this is pretty cool. A bear and a what heraldry seems to think is a 'ragged staff' even though it looks more like a tree without branches or a really tall stump of some kind. It was officially adopted and registered with the Flag Institute in August of 2016 and secured the sanction of both the Lord Lieutenant and High Sheriff in the process. The symbol of the bear and staff dates back to the Middle Ages, making their first appearance on a seal used by the Beauchamp Family, who became the Earls of Warwick all the way back in 1268. (Hey- this one didn't come about because of Agincort. That's kind of cool.) 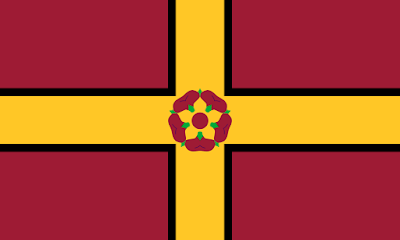 Right next door to Warwickshire, you've got Northamptonshire which is known as 'The Rose of the Shires' and actually has some history worth talking about before we get into the nitty-gritty of it's flag. The history of the place stretches all the way back to Roman times and there was a castle that was build for William The Conquerer at Rockingham and was used all the way up through Elizabethan times. Fotheringay Castle- now ruined, was where Elizabeth the First imprisoned Mary Queen of Scots. But the real interesting connection is to George Washington of all people: his family hailed from this county and only emigrated in 1656 to America. His ancestor, Lawrence Washington was Mayor of Northampton a few times and purchased Sulgrave Manor- the family home from Henry The Eighth in 1539.

Random, but cool history- I dig it.

As for it's flag: it was registered with the Flag Institute in September of 2014 and it was the winning design of a public vote. The cross stands for the county's location as a crossroads of England. The colors come from the local cricket team and the town's football team and the black border represents the leather industry that is so popular and important in the county. The rose was taken from historic depictions of roses used to represent the county.

There we have it: Warwickshire and Northamptonshire...