This Week In Vexillology #267

August 25, 2018
After a week off (we were in Minnesota for a wedding), This Week In Vexillology is back with a double shot from the Lost Archives of the Unfortunate Wordpress Experiment...  we're heading down to South America this week with the flag of Venezuela: 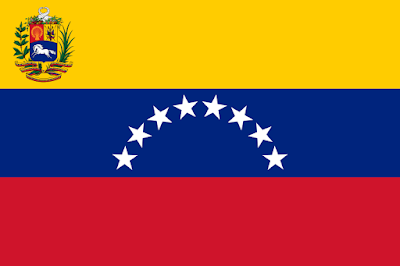 (True story: I actually have this flag...  it's just buried somewhere, thanks to our move.)

Venezuela's flag is the one designed by Francisco de Miranda for his attempt to liberate the country in 1806 from the Spanish. Venezuela at the time was part of the Viceroyalty of Gran Colombia, which is why you see similar colors/configurations in the flags of Colombia and Ecuador. But the fascinating genesis for these colors specifically apparently came out of a conversation he had with the philosopher Goethe at a party in 1785.

Goethe told Miranda that his "density is to create in your land a place where primary colors are not distorted" He expounded further:


First he explained to me the way the iris transform light into three primary colors, then he proved to me why yellow is the most warm, noble and closest to white light; why blue is that mix of excitement and serenity, a distance that evokes shadows; and why red is the exaltation of yellow and blue, the synthesis, the vanishing  of light into shadow. It is not that the world is made of yellows, blues and reds; it is that in this manner, as if in an infinite combination of these three colors, we human beings see it... a country starts out from a name and a flag and it then becomes them, just as a man fulfills his destiny.

That is such a great quote and such a deep origin story for this flag. (In later diaries, Miranda references a yellow, blue and red standard of the Burgers' Guard of Hamburg.) The current symbolism has yellow standing for the riches of the country, the wealth of the soil, gold, sovereignty, harmony, justice, agriculture as well as the Sun. (That's...  kind of a lot.)

The blue is for the Caribbean and the red is for the blood that was spilled gaining independence from Spain. The seven stars represent the seven provinces that were signatories to their Declaration of independence: Caracas, Cumana, Barcelona, Barinas, Margarita, Merida and Trujillo.

Now, I know what you're thinking: there are eight stars on that flag. And what's up with the Coat of Arms? Well the 8th star represents the province of Guyana- which is roughly everything west of the Essequibo River in modern day Guyana, which Venezuela still claims and was part of the country at the time of independence. The eight star, along with the coat of arms was added in 2006 by Hugo Chavez and despite the approval of the Venezuelan government, the opposition refused to recognize the changes. So I guess if you're down with Chavez and his regime, you'd be okay with this flag. If you're not, just remove a star and the Coat of Arms and there's the flag of your Venezuela.

It's the last of South America's national flags from the Lost Archives, so give it up for Venezuela! And remember, until next time keep your flags flying- FREAK or otherwise!