Netflix & Chill #48: The Death of Stalin 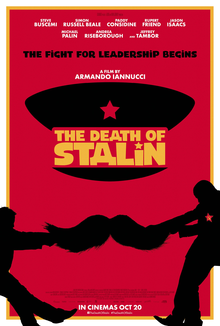 But then there was the cast: Steve Buscemi, Jeffrey Tambor, Jason Isaacs, Michael Palin, Simon Russell Beale? You'll recognize a lot of the names, but I think I'd probably seen just about everyone in this film in something or another over the years and it all works, really, really well.

As the title suggests, the film tells the story of the death of Josef Stalin (Adrian McLoughlin), who is paralyzed by a stroke after receiving a note from a pianist, Maria Yudina (Olga Kurylenko) who tells him that he's ruined the country. His death sets off a mad scramble from the members of the Central Committee who rush to praise the fallen leader and mourn appropriately (trying, literally, to 'out-grieve' each other) while at the same time jockeying for position to succeed him. Initially, it seems that the head of the NKVD, Beria (Simon Russell Beale) is on the front foot. He moves the NKVD into position to oust the Red Army from their security duties in Moscow and guides Malenkov (Jeffrey Tambor) into the leadership, hoping to use him as a puppet.

Opposing Beria is Khrushchev (Buscemi), who attempts to enlist the support of Molotov (Michael Palin), who was out of favor and on Stalin's enemies list at the time of his death. Beria, however, releases Molotov's wife to buy his loyalty. Both Beria and Khrushchev try and win victories by gaining control over Stalin's son, Vasily (Rupert Friend) and his daughter, Svetlana (Andrea Riseborough.) Khrushchev is sidelined by Beria who gives him the task of organizing Stalin's funeral while pushing Malenkov to adopt liberal policies such as releasing prisoners and loosening restrictions on the Orthodox Church which Khrushchev had been pushing for.

Khrushchev gets a lifeline with the appearance of Field Marshal Georgy Zhukov (Jason Isaacs) who demands to know why the Red Army had been confined to barracks by the NKVD. He agrees to provide the armies support to overthrow Beria, but only if the rest of the Committee agrees. Khrushchev then undermines Beria by allowing trains to resume to Moscow letting mourners into the city- the NKVD opens fire on them, killing 1,500. He then lies to the Committee and Zhukov and insists that he has Malenkov's support. The Red Army movies into position and they arrest Beria, Khrushchev coerces Malenkov into signing the papers for Beria's trial. They find him guilty of treason and sexual assault in a kangaroo court and then execute him.

Khrushchev, now extremely powerful indeed, gives Svetlana a ticket to Vienna and assures her that her brother will be cared for. The movie ends with Khrushchev, now Supreme Leader in his own right, having removed his co-conspirators, watching a concert given by Maria Yudina while above him, future leader Leonid Brezhnev, watches.

I don't know how Iannucci manages to pull off this high-wire act, but he does. The movie pulls no punches about the horrors of Stalin's regime, showing the NKVD making their nightly rounds to snatch people from their homes to uncertain (often unpleasant) fates, but it also shows the absurdities of it as well. When the concert that opens the movie ends, Stalin calls and demands a recording of it, so the director has to stage the concert again with an entirely new audience to deliver Stalin what he wants.

The comedy is dark. Deep, dark, black comedy- but the cast of this movie is absolutely brilliant. Jason Isaacs as Marshal Zhukov just about steals the movie right out from under Steve Buscemi's Khruschev and produces some genuine laugh out loud moments in the process. No one bothers even trying to pretend to have a Russian accent, which I think is the correct decision, because it allows the cast to occupy their roles more comfortably and completely. Tambor portrays Malenkov as being twitchy and overmatched, which he more or less is. Beale is icy cold as Beria and Palin plays Molotov as a man who's been through a lot, but is recovering his sense of opportunity and power as the movie unfolds.

Overall: a darkly hilarious look at a very bloody and overlooked chapter of 20th Century history, The Death of Stalin is a masterpiece of black comedy with a cast that delivers the goods. Steve Buscemi seems slightly unconvincing as Khrushchev at the start of the movie, but by the end of the movie there's no doubt: he is Nikita Khrushchev and he's the man in the charge. My Grade: **** out of ****