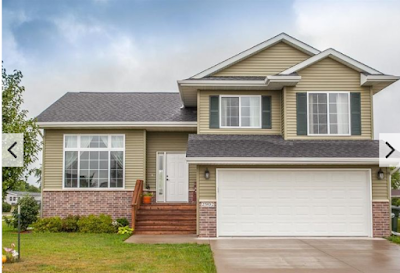 What made us move? Well, my parents have been building a house and trying to sell their current house- but the market just hasn't been sending them any offers. Like, no offers at all. They tried reducing the price with no luck and finally they made us an offer we couldn't really refuse and we went ahead and did it. That's right. We're buying my parents' house.

I was more ambivalent than I expected at first. Our current house is beautiful and it's been a great home for us for over two years now- and my parents' house, well... it's their house. Both the Missus and I have sort of wondered aloud during this process whether it's ever going to feel like ours- and I think it will, eventually- especially since we've both decided that after this, we're never, ever moving again. Like ever. We might die in this house- that's what packing up and moving your entire life in the space of about three days flat will do to you.

Our once and future house? Well, it's got space. More space than we'll probably know what do with or ever need. It's also closer to both of our works and even when Hoover closes down next year, it'll be safely inside a school boundary, so, barring so lunatic boundary drawing on the part of the school board (which I can't rule out), we should be good for a school attendance zone for all the kiddos as well.

The first night in the once and future house, I took the Elder Spawn and the Medium Spawn and walked down to the playground at Hoover so they could get their ya-yas out. As we were leaving, I turned and saw the familiar outline of City High's bell tower framed against the setting sun. It was then that I realized how much I had missed that particular view. I have no idea if the Spawn will ever appreciate that view as much as I did as a kid, but that's not really important. I love the idea that they'll have a chance to see it.

As for our old house: we went over to bury a St. Joseph statue near the FOR SALE sign, to hopefully get a quick sale. I went back inside to turn off the lights in the house and had a melancholy moment as I turned them off one by one. There are a lot of memories in that house. I loved that it was on the edge of town where the skies are darker and you can see more stars. I loved the sunsets and the sky- so open and clear. It was a beautiful house with a lot of memories. I don't think either the Missus or myself were planning on writing a new chapter just yet, but here we are. New house. New chapter.