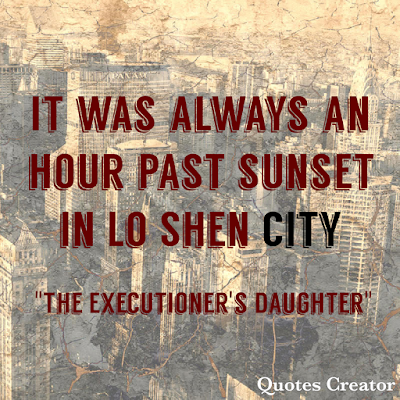 It's #ShortFictionFriday, so I'm awfully pleased to present "The Executioner's Daughter."

The germ of this story came out of a recent episode of Hardcore History that I listened to (specifically 'Painfotainment') which mentioned that the job of executioner was traditionally seen as 'unclean' and people weren't usually allowed to touch them and they had to wear special robes when they were out and about in public. They were sort of a profession apart and had a tendency to marry into other families of executioner's. For some reason, that part just sort of stuck in my head and my brain went back to Venus and the world of the floating cities and colonies that I had thought up with "That's Venus, Baby" and so, Lo Shen City came into being and it all sort of fell out of my brain from there.

It feels like there's more to the story than this and as I was writing it, I began to wonder if Ruthie and her story were somehow connected to two other short stories that I had written ("That's Venus, Baby" and "Illumination on Titan."). I don't have an answer to that question yet, but I feel like these three stories occupy the same universe, if that makes sense. Whether or not they'll intersect and become a story themselves (or even a book) I don't yet know.

In the meantime, I hope you like the story.

And if you're all about Wattpad:

Read it! Review it! Enjoy it! Feedback is always welcome- I just hope you enjoy reading it as much as I enjoyed writing it.