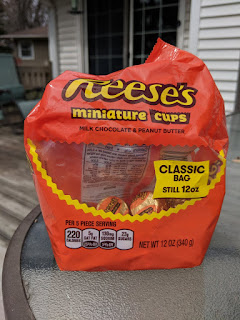 Truly, one of the greatest confectionery wonders of the modern age is the combination of chocolate and peanut butter. The ideal combination of these two ingredients, is, of course, to be found in the peanut butter cup. If you think it's a matter of taste, well then consider the fact that Reese's Peanut Butter cups are the number one selling candy in the United States of America right now. What's fascinating about the peanut butter cup is that it seems almost destined to have come to pass.

Milk chocolate in liquid form emerged in the 1830s in Saxony and morphed into bar form by 1875 when Daniel Peter and Henri Nestle developed the first solid milk chocolate bar in Switzerland. The use and cultivation of peanuts dates back to the Aztecs and Incas, but it wasn't until Marcellus Gilmore Edison came along and obtained a patent for it that the modern form of peanut butter began to kick around. (To be filed under, 'Today I Learned', apparently George Washington Carver did not invent peanut butter. I think I also thought that Carver Hawkeye Arena was named after him for awhile when I was a kid, which goes to show what I know!)

All of which brings us back around to the Reese's Peanut Butter Cup. Founded by a foreman of the Milton Hershey Company, H.B. Reese in 1923, there were originally multiple lines of candy in the company, but once Mr. Reese realized that his peanut butter cups were selling like hot cakes, he discontinued everything else to focus on the awesomeness of the peanut butter cup.

He left the company to his sons, who brought it back home to the Hershey Company in 1963 in a stock-for-stock merger. Let this quote blow your mind for a second:


In 2017 after 54 years of stock splits the Reese brothers' original 666,316 shares of Hershey common stock represented 16 million Hershey shared valued at over $1.8 billion that paid annual cash dividends of $42 million.

People love peanut butter cups. And looking at their list of current products, there's so many to choose from. Which begs the question: which ones are the best? Here's what I came up with:

1. Reese's Miniatures: the ideal size of cup. Not too small (like the minis) and not too big (like the regular or BIG cups.

2. Reese's Honey Roasted Peanut Butter Cups: y'all, these are good. And it's a good thing they don't come in big-ass bags, because I would eat the whole damn bag.

4. Reese's Crunchy Cooke Cup: I put this over the piece's cup, just because I like the texture. It's nice to get a little bit of crunch in your cup sometimes.

5. Reese's Pieces Cup: different texture, so it's good, but not quite as good as the crunchy cookie cup.

6. Reese's Dark: good, but not nearly as good as Trader Joe's version.

7. Reese's White: I'm eating some white miniatures at the moment and I'm still not sure how to feel about them. I don't think that white chocolate and peanut butter balance each other out well enough.

8. Reese's Eggs/Trees/Holiday Shapes: they're always good, but you can't beat the miniatures or the regular varieties of cups.

9. Any and all BIG Cups: Proof that you can have too much of a good thing.

10. Reese's Minis: easy to eat by the bagful, they're just not well balanced enough. You need a good solid chocolate to peanut butter ratio to really enjoy a peanut butter cup and the Minis don't quite get there.