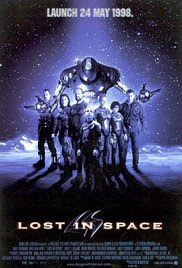 I rewatched this in stages while I was watching the Netflix reboot of the television show, partly because I thought it would be interesting to compare and contrast and partially because I honestly remembered not hating this movie. Having watched it again, I can confirm two things: this movie was not that great and it was very, very late 90s.

Basically: it's the year 2058 and Earth will be uninhabitable in twenty years due to the lack of fossil fuels and the ozone layer evaporating. (Ah, the ozone layer and peak oil... the overused movie maguffins of the 1990s.) But, happily, humanity has a plan. Led by Professor John Robinson (William Hurt), they're going to travel to the newly discovered inhabitable planet of Alpha Prime, construct a hyper gateway there to link up with the one that's being built on Earth as the movie opens and then humanity will be able to colonize the new planet in the blink of an eye. Of course, there are terrorists of the Global Sedition that oppose the construction of the hyper gate and attempt to destroy it.

The Robinson Family are heading to Alpha Prime first to start the colonization and with them, they'll have their hotshot new pilot, Major Don West (Matt LeBlanc) flying them there. They'll also have a stowaway, after the villainous Doctor Smith (Gary Oldman) who's been sabotaging the mission for Global Sedition for sometime, gets betrayed and left for dead onboard. Smith initially planned on repgramming the robot to kill the family and destroy the ship 16 hours into the mission, but when he wakes up to find himself onboard, he manages to stop it, but not before the robot sends the Jupiter 2 spiralling into the sun. With no other choice, they make a blind jump into hyperspace.

They find themselves in orbit of an unknown planet with an unknown ship above it. They board the ship to find out what's going on and figure out that it's an Earth ship sent to find them and that somehow, they've traveled through time. Further revelations reveal that the ship is empty and full of spiders and a random, color changing space monkey who takes a shine to Matt LeBlanc, Heather Graham and then Lacey Chabert. When the spiders attack, they flee and end up crashing on the planet, but not before one of the spiders takes a nibble off of Dr. Smith.

Once on the planet, they figure out that there's a strange time distortion that's causing the planet to shake apart and said time distortion is the key to get them off the planet before it shakes to pieces. So, John Robinson and Don West set out to investigate and because kids are kids and evil saboteurs are evil saboteurs, Dr. Smith and Will follow them. The origin of the time shenanigans are revealed, there's a touching realization about the important of being present in the lives of your children for Professor Robinson and oh yes, Dr. Smith meets his future self who turns out to be a giant mutant spider and after some technobabble and maguffination, everyone gets back to the ship and then, they have to figure out how to get off the planet.

This leads to the one part of this movie I remember the best. The end... when William Hurt turns to Matt LeBlanc and rasps out, 'Go... through it.' And then they go through the planet to get out the other side and jump into hyperspace, presumably to their destination, though they don't actually establish that.

Overall: This movie has not aged all that well. It's a delightfully retro late 90s blast from the past that is... generally okay. Matt LeBlanc is at his best when flirting with Heather Graham, but awfully wooden when being a military hotshot pilot. (I feel like that role was sort of written all wrong. You can be Ice Man or Maverick. You can't really be both and I feel like they tried to make Don West into both.). Mimi Rogers and William Hurt have decent chemistry, but nothing that really makes you pay attention. I totally forgot Heather Graham was in this movie and Gary Oldman manages to make something out of every role he's in. Other than that, it's kind of badly aged cheese. My Grade: ** out of ****