Netflix & Chill #44: Valerian and The City of A Thousand Planets 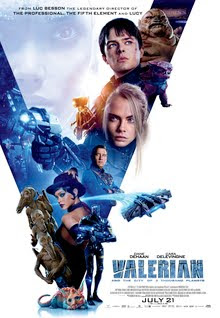 Special Agent Valerian (Dane DeHaan) wakes up from a a dream about the planet Mul, where the inhabitants live in a low technology paradise. The pearls they fish for contain enormous amounts of energy and small, lizard like creatures replicate more pearls. In his dream, he sees wreckage begin plummeting from the sky and then there's an apocalyptic explosion and just before it reaches the young princess, she sends out a telepathic signal- and then, Valerian wakes up.

He is pretty shaken by his dream and an analysis indicates that he may have received a signal from across time and space. He and Special Agent Laureline (Cara Delevigne) learn that there mission is to retrieve the last of the Mul converters (the lizard like, pearl making creatures from the planet Mul he saw in his dream). Before they arrive at their mission, Valerian asks Laureline to marry him, but she brushes him off. She thinks he's too afraid of commitment and has many affairs with their female colleagues.

They travel to the extra dimensional bazaar called Big Market ,where they secure the converter and Valerian steals one of the pearls on the sly. Together, he and Laureline learn the origins of the pearl and the converter: the planet Mul, destroyed thirty years ago.

Returning to Alpha, they learn from their superior, Commander Arun Filitt (Clive Owen) that there is an infection at the center of the station and it's growing. The two agents are tasked to protect the Commander while they host an interstation summit to figure out what's behind it, but Laureline defies his wishes to retain control of the converter. The humanoids who had also tried to purchase the converter in the Big Market attack and kidnap the commander.. Valerian pursues the kidnappers but Laureline loses track of him at the edge of zone at the center of the station.

Eventually, they uncover the truth: the Commander was responsible for the destruction of the Planet Mul and covered it up. The surviving inhabitants hid themselves away on the station and learned the technology to rebuild their home- all they need is the pearl and the converter. Laureline and Valerian confront the commander about his role in the genocide and after a brief fire fight with the robot soldiers he programmed to do his bidding, the survivors of Mul escape to restore their home and Valerian and Laureline survive in a working ancient Apollo-style module where, while waiting for rescue, Laureline finally accepts his marriage proposal.

Overall: I'm not entirely sure how to feel about this movie. As a mildly bonkers space opera, it's a solid science fiction outing that's worth watching at least once if science fiction space opera is your jam. Rihanna is in this movie, so it's got that going for it. I haven't read the original source material, so I don't know how faithful an adaptation this is, but The Fifth Element blew me away. Valerian just sort of comes across as sort of 'meh.' It promises so much and fails to deliver. My Grade: ** out of ****