May 05, 2018
This Week In Vexillology, we're dipping back into our Lost Archives (courtesy of The Unfortunate Wordpress Experiment) and heading back down to South America to take a look at a couple of Brazil's most dominant states, Sao Paulo and Minas Gerais. The subtitle of this post refers to the system of patronage and 'rule of the colonels' that dominated Brazil's Old Republic. The first Presidents of the Republic were from Sao Paulo but afterwards, the two states traded the Presidency right up until the 1930 Revolution which ushered in Brazil's Estado Novo under Getulio Vargas broke the old system's grip on power. (Cafe = coffee, which was the dominant industry in Sao Paulo, Leite = milk, the dairy industry which was dominant in Minas Gerais)

First up, the state of Sao Paulo: 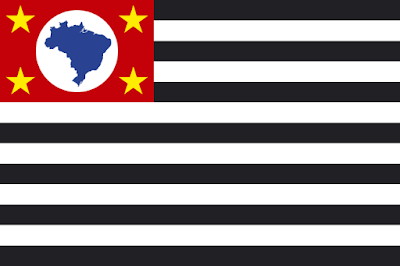 This flag was designed by Julio Ribeiro in 1888 and it was originally intended for the entire country, but became a de facto symbol of the state after the Constitutionalist Revolution of 1932. It wasn't officially adopted until November 27, 1946 after states and municipalities were given the right to create their own symbols under the Federal Constitution.

The thirteen stripes alternating between black and white represent the days and nights that the bandeirantes fought for the good of the state. Here's the thing though: I'm not sure what fight they're referring too. The 1932 revolution lasted a few months and the dissolution of the Empire and change to a Republic was less of a popular revolt than more of a coup d'etat.

The canton has a red rectangle on the upper left corner, representing the blood shed for the state. The white circle has an outline of the country in blue, the color of strength. A yellow star is in each corner of the rectangle and stands for the Southern Cross. The combination of red-black-white is meant to represent the three constituent races of Brazil: amerindians, blacks and whites.

Next up, the state of Minas Gerais: 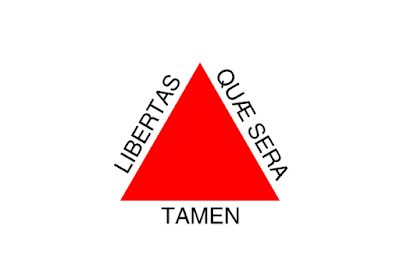 The flag of Minas Gerais seems a little boring, but when you dig into it, you realize that there's a lot of history behind it. The words: 'Libertas Quae Sera Tamen' is the state motto, which is taken from the Latin and means, 'Freedom, albeit late.' It recalls the Inconfidencia Mineira, which was a failed conspiracy that happened in the state around 1789, which the goal of freedom from Portugal and creating a Republic with democratic elections. The flag the conspirators proposed for their new Republic was almost identical to the current flag of Minas Gerais except the triangle in the center- which was green. The triangle itself was equilateral triangle that was inspired by the Holy Trinity.

And that's our shot of cafe com leite... remember, until next time, keep flying those flags, FREAK or otherwise!