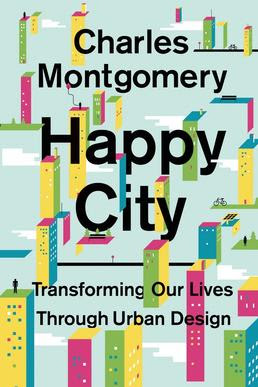 I think I first heard this book mentioned on a Tim Ferris podcast- specifically, the interview he did with Mr. Money Moustache (whose blog/site is fairly fascinating as well.) But, given the fact that I've always had sort of a itch to learn more about city and urban planning, it seemed like an interesting enough topic that I snagged the book on Kindle a few months back and slowly and steadily made my way through it, becoming more and more fascinated about the topic as I did so.

Charles Montgomery opens the book looking at the transformation of Bogota under forwarded thinking Mayors that wanted to shake up the image of a city battered by Colombia's long struggle against the drug cartels and by the exploding number of cars that were choking the streets of Bogota. People weren't happy and so they began to experiment with different ideas to change the architecture and design of their city, including the fantastically successful Ciclovia, where the people of Bogota turned their streets back over to the people. Montgomery uses the experience of Bogota to dive deeper into his thesis: the design of cities and the cities we live in have more to do with our own personal happiness than we think they do.

Montgomery's case is a persuasive one. He looks at a commuter suburb in California and examines the commute times and the lack of connection that results from America's pervasive suburban sprawl. McMansions in suburbs combined with long commute times mean that people spend all their time in cars and their weekends at home and lack a cohesive connection to the community in which they live. People don't talk to their neighbors. People don't know their neighbors. Lots of these suburban towns lack coherent identities because they're just places where people sleep, in many ways. All of these factors combine to the inescapable conclusion: the design of the cities we live in are making us unhappy.

The question for Montgomery then becomes: what can you do about it? How can we change the cities we live in? What have people actually done? That last question to me was probably the most fascinating aspect of this book over all. Montgomery delves into stories of the initiatives that cities have explored to change their design, ranging from Copenhagen turning the Stroget into a car free pedestrian zone, to a neighborhood in Portland who turned the intersection of SE Sherrett Street and SE 9th Avenue into a meeting place/focal point for their neighborhood by coming together to paint the intersection. Both of these examples you can find for yourself using either Google Maps or Google Street View, which is probably what made me enjoy this book so much. Montgomery's message isn't abstract: you can see it for yourselves.

The solutions are out there, but it's the battle to implement them that illustrates the scale of the problem facing the folks that are trying retrofit their way out of sprawl: the city code. This was probably the craziest part of the book to me...  it's not that cities don't want better design and it's not that people don't want better cities, it's that you can just start building the city you want. In many, if not most cases in America, it's the code that governs the city development that's the stumbling block to creating a better city, so the dreams of many an urban retrofitter are tempered by the fight to open up the city code from (in many cases) the monolithic, one size fits all, fill in the blanks kind of a Bible that many cities use to a code that allows cities to develop the diverse infrastructure that both cities and people need to maximize their own happiness.

Overall: I loved this book. I've sort of developed a fascination with the concept and power of design in general and this book scratched all the right itches for me. I'm scratching my head trying to think of the weak spots and maybe, maybe the one that comes to mind is Montgomery's insistence on pointing out how some of these ideas will impact the issue of climate change if implemented. While the intersection of urban design and climate change isn't something he makes a focal point of the book (and it's not something that bothered me particularly) but I know it's probably enough in this day and age to make some readers dismiss the entire book out of hand. Personally, I think that'd be sad, because whether you live in a big city or a small city, we all deserve to have better, happier cities to live in. **** out of *****