This Week In Vexillology #236

November 04, 2017
We're jumping back into the Lost Archives this week- but with a twist! Turns out that Mauritania has made some changes to it's flag recently and by recently I mean in August! It's not much of a change in the grand scheme of things, but it's shiny and new and This Week In Vexillology, it's what we're going to take a look at: 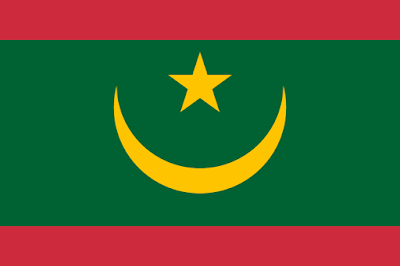 So, what's new? Like I said- not much, but we've got some snazzy new red stripes at the top and the bottom of the flag. Why the changes? Well, President Mohamed Ould Abdel Aziz held a referendum to do some tweaking of the way things work over there. One question wanted to abolish the indirectly-elected Senate and it's replacement with regional councils. Islamic High Council and the national Ombudsman into a 'Supreme Council of the Fatwa' (which sounds like a fun time.) The second question was about the changes to the flag (which we'll get to in a minute.) Mauritanians went to the polls and said 'YES' to both questions by wide margins...

The official changes to the flag were adopted to August 15th, 2017 and it's used as the national flag and naval ensign of Mauritania. The color break down is pretty simple: green, gold and red are considered Pan-African colors, but Green in this case also symbolizes Islam, gold is for the sands of the Sahara desert. The (shiny new) red stripes stand for: "the efforts and sacrifices that the people of Mauritania will keep consenting, to the price of their blood, to defend their territory." The crescent and star are symbols of Islam, which is the state religion of Mauritania. (There's also an alt-explanation for green as possibly being for a 'bright future' and 'growth' out there, but nothing official on that score.)

Two things that stand out immediately looking at the new flag of Mauritania: first, is their take on the pan-African colors. In general, I understand the historical significance of the Pan-African Movement and it's flag and colors have had a huge impact on vexillological design, especially in West Africa. (See: Ghana and pretty much everyone around it.) What I like here about Mauritania's addition of the red is that it creates a balance that reflects it's geographical position between the core of West Africa and the sort of Maghreb/Arab Countries to the north. The green and red nod toward the south and the green and gold crescent/star nod toward the north. I dig it.

Second, let's talk about the crescent and star. I like how Mauritania places their crescent and star. It's centrally placed, the star is above the moon and the moon is underneath and not to the left, which is the placement you see in Turkey, the new flag of Libya, Tunisia and Algeria. Going out on a limb here- I'd say the North African Crescent/Star has some historical roots that date back to the Ottoman placement of the crescent and star- but a search of the Old Google Machine reveals that Mauritania seems to be the only country that places the crescent/star this way, which makes it stand out in the crowd a bit more.

All in all, I like the new look Mauritania...  remember, until next time keep your flags flying- FREAK or otherwise!