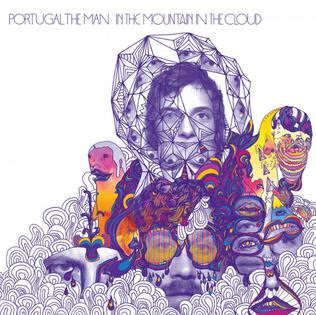 Portugal. The Man is one of those bands that has sort of popped up on my radar now and again over the years- I've seen mentions of them float by on various social media feeds now and again, but I had never actually bothered to sit down and listen to any of their stuff until Bill Burr mentioned them on a recent episode of Monday Morning Podcast and I thought, 'well, hell. Why not?' So I found an album and took it out for a spin.

The first thing that stands out about the band is probably it's name. "Portugal. The Man" is kind of a brilliant name. It a declarative statement 'Portugal.' followed by the reassuring clarification 'The Man' to make sure the listener knows we're talking about a band and not a country here. The band's wiki-page has their origin listed as Portland, Oregon, but I guess they all got together and started playing music during their high school years in Wasilla, Alaska. Having listened to at least one of their albums, I think it's safe to say that they are a far cooler export than the Palin Clan.

Before I get into the nitty-gritty of In The Mountain In The Cloud, I should confess that I both enjoyed their music and found it to be something of a puzzle. It didn't seem to quite fit anywhere comfortably in my head- it seemed sort of psychedelic in many ways and reminded me a little of T-Rex, for some reason, but at least with this album, it's not a definition you can apply to them universally across the board either. (Wikipedia has them as: alternative rock, psychedelic rock, psychedelic pop and experimental which was... unhelpful to say the least.) I know that however you classify them, I liked the sound. It was big and orchestral but not in an obnoxious kind of way and it blended well with the sort of alternative rock thing they've got going on. Though thinking more on the 'psychedelic rock' thing you can sort of see a Flaming Lips type vibe going on. (If the Flaming Lips were more rock than... whatever it is they are, they might sound a little like this. I think.)

Clocking in at 42 minutes or so, the album itself is about the perfect length, I think. If it were shorter, I think the listener might feel short changed and longer you get into experimental weird territory that I just don't know if people would have the patience for any more these days. It opens with 'So American' which immediately captures your attention- but it's 'Senseless' (which has retro, older vibes that sort of remind me of older Bowie/psychedelic Beatles era in a way- if that makes sense.) That track along with 'Everything You See (Kids Count Hallelujahs)' are probably the tracks I liked the most.

The overall tone of the album sort of shifts with 'All Your Light (Times Like These)' into sort of darker, edgier territory. (Thinking about it, I dig this track as well.) 'Once Was One' and 'Share With Me The Sun' sort of seem to be sliding the album down to the end with 'Sleep Forever' rounding out the album.

Overall: This was a great album, but I think I got more enjoyment out of listening to the band's Spotify playlist which had a little bit of everything from all their albums. I'll absolutely listen to more of this band, but would I buy this album? Maybe. It's got a cool album cover, but I have to wonder if Portugal. The Man has better albums out there.  My Grade: *** out of ****