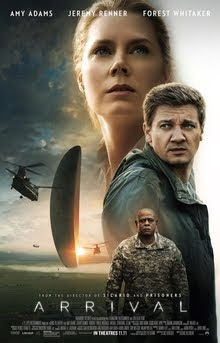 Arrival opens with a sequence that shows Louise Banks' (Amy Adams) daughter Hannah, dying in early adulthood from an incurable disease of some kind. (It's never actually named, but it appears to be cancer.) She heads to work the next day to her job as a linguistics professor/teacher and everyone seems to be incredibly distracted by something and half her lecture hall is empty and when Louise turns on the television, she finds out why. Twelve extraterrestrial spacecraft have appeared in twelve different locations across the globe- their purpose is unknown and attempts to communicate with the craft seem to be unsuccessful. But an Army Colonel Weber (Forest Whitaker) shows up at Louise's door to recruit her to join the government's effort to establish contact with the aliens.

Louise initially insists that she has to be on sight to meet with the aliens in order to fully understand their language, but Weber accuses her of trying to get access to the camp like everyone else with a top secret clearance is right now just so she can see. Louise then asks if he's going to talk to another expert and he replies 'maybe.' She tells him to ask the second expert what the Sanskrit word for 'war' is and what it means.* This turns out to be a wise move on Louise's part, because Weber shows up at her house with a helicopter and asks her the same question- turns out, he likes her answer better and they bundle her into the helicopter and fly her off to the site in Montana where the alien craft is located.  On the way, she meets Dr. Ian Donnelly (Jeremy Renner), a physicist that has been recruited to help with the aliens as well.

Once on site, they put together a team and go into the alien craft, where Ian and Louise make contact with two seven-limbed aliens, whom they call 'heptapods.' (Ian nicknames the two they talk too Abbott and Costello.) The initially have no luck communicating until Louise starts writing things down, and the aliens respond with a series of complicated circular symbols. As Louise studies the language, she starts to have visions of her daughter, Hannah.

With countries starting to get nervous and twitchy about the aliens, Louise is pressured to ask why the aliens have come and they reply, 'offer weapon.' Which initially makes the military get very nervous indeed until Louise points out that their word for 'weapon' could easily mean 'tool.' China, however translates 'offer weapon' as 'use weapon' and cuts off communications with the other nations and the aliens. But Louise argues that the competitive nature of their interactions with the aliens might have resulted in a bad translation.

Tension starts to ratchet up when Chinese General Shang issues an ultimatum, demanding the aliens leave in 24 hours and Russia, Pakistan and Sudan follow suit. Despite an attempt by rogue soldiers to blow up the the aliens, Louise goes back to the craft alone and the aliens explain that they have come to help humanity because in 3,000 years they will need humanity's help in return and the 'weapon' is their language, which opens time to allow the future to be seen. Louise realizes that the visions of her daughter are in fact, from the future and she soon has another premonition from the future where she meets General Shang at an event at the United Nations and he gives her both his private number and his wife's dying words and thanks her for convincing him to call off the attack. Using that knowledge, Louise does just that and the countries of the world begin to cooperate to decode the twelve separate parts of the Heptapod Message and then the craft one by one disappear.

As Ian and Louise watch the craft disappear, she asks him if he would change his life choices if he could see the future and he replies that he wouldn't. And then Louise knows that she will agree to have a child with him (Hannah) and that Hannah will die and Ian will leave them after she tells him that she knows that Hannah is going to die.

I loved this movie. The whole idea of 'first contact' has been done dozens, if not hundreds of times in various mediums through the years, but this felt like a refreshing twist on the idea by focusing so much on language and the niceties and problems of linguistic communication when you have no common frame of reference** is a beautiful illustration of what a real First Contact is probably going to be like- trying to figure out how to communicate before you get down to the brass tacks of why the aliens are here, etc etc.

Overall: Amy Adams is excellent and Jeremy Renner and Forest Whitaker are perfect complements to her beautifully restrained performance. This is interesting, thought provoking science fiction at it's very very best. My Grade: **** out of ****

*Holy shit, this is like a tiny moment in the movie and wow did it provoke a lot of discussion... check out of this Reddit Thread.

**'Darmok' from Star Trek The Next Generation is another episode that tackles a similar issue and does so excellently. It's also a great episode of Star Trek.