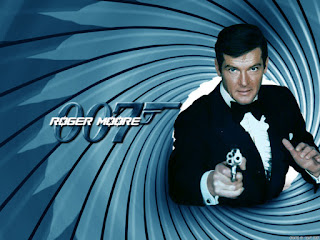 The passing of Roger Moore, who I've long considered to be one of the best James Bond- or at least the one that made the greatest impression on me when I first watched the franchise, got me thinking about how long it had been since I had actually seen any of his Bond movies. One quick trip to the Parentals later and I had their blu-ray set of all the Bond flicks and I was off and running.

I could have (and arguably, maybe should have) done this in chronological order, but for whatever reason I didn't. Instead, I started with one of my favorite Bond movies, full stop and probably the most underrated film of the franchise, Octopussy. I've always liked this one, because it's very grounded and could probably stand up as a straight Cold War thriller all by itself. When 009 turns up dead at the British Embassy in West Berlin with a fake Faberge egg, Bond is soon on the hunt to find the killers. What he does find is a mysterious circus, run by an equally mysterious woman known only as Octopussy, who lives in on an island populated solely by women in India. Following the trail to India, Bond soon is being hunted himself by Kemal Khan and his henchman, who are working with the renegade Soviet General Orlov to auction fake jewelry in the west to raise money for their purposes- which turn out to be nuclear in nature! Racing against time, Bond tracks the Octopussy Circus back to an American Air Force Base in West Germany, disarming the nuclear bomb in the nick of time.

Next, I backtracked to a movie that I always remembered as annoying me, but actually turned out to be a pleasant surprise, The Man With The Golden Gun. It's hard not to roll your eyes from the word go with this one. Scaramanga is a deadly assassin with a third nipple? Christopher Lee is bombing around in uber 70s Jumpsuits? Knick-Knack is the one who is actually trying to kill him by hiring all these assassins to come to his island paradise to hone his skills. It's very Fantasy Island at first, but turns nicely on a dime once Bond is taken out of action because Scaramanga is coming after him. Setting out to track down Scaramanga, Bond ends up in Macau, then Hong Kong and finally in Thailand where he runs into (inexplicably) Sheriff JW Pepper from the previous film. Eventually, he tracks down Scaramanga for a final showdown on his island- which, obviously, he wins. I thought Maud Adams as Andrea was great in this movie- granted, there's the never-ending problem of how women are written in these films (strong one minute, 'oh James' the next) but she turned in an excellent, icy performance- and when Bond pretty much tries to walk in on her while she's in the shower, she pulls a gun on his ass and gives him whatfor, which is appropriate. Britt Eckland as Goodnight also turns in a strong performance and is actually helpful instead of just arm candy. (And gets pissed at Bond for being such a floozy, which is something you don't see all that much of.)

Finishing off Part 1, I began with my very first Bond movie- and Roger Moore's debut, Live and Let Die. When the British Ambassador at the UN dies and British agents in Louisiana and the Caribbean Island of San Monique turn up dead along with him, Bond is sent to America to work with good old Felix Leiter to figure out why. The CIA's suspicions center around the leader of San Monique, Dr. Kananga, who always travels with his personal tarot card reader named Solitaire. But Bond soon finds himself tangled up with the drug kingpin Mr. Big and soon enough, they find out the connections between Kanaga and Mr. Big and go to San Monique to stop his drug smuggling operation before it can flood the United States with heroin. There's a lot to like about this movie- there's bayou boat chases, voodoo rituals, tarot cards, a young Jane Seymour, the excellent Yaphet Kotto. (You know the ill-tempered sea bass with laser beams on their laser beams on their heads from Austin Powers? They came from the end of this movie.)

Moore took the franchise in a different direction and these films showcase him at his best in a lot of ways. There's the one-liners, the humor, the carefully controlled sense of camp- they made these movies not just entertaining action packed adventures, but they made them fun. And that only adds to the enjoyment of them. Three movies down- four to go! (Of the three, I'd say Octopussy is probably my favorite and Live and Let Die and The Man With The Golden Gun probably tie for second- the latter was much, much better than I remember it doing.)