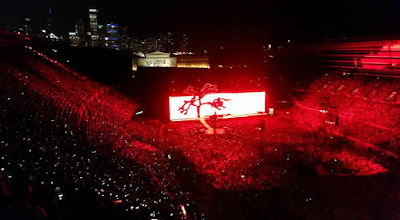 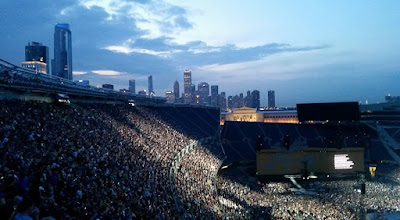 Believe it or not, this whole project of mine began two blogs ago on the 1st of June with none other than The Joshua Tree, so it seems only appropriate to revisit the album that started it all, albeit with a slightly different experience this time around. Way way back in January, U2 announced they were launching a 30th Anniversary Tour for The Joshua Tree it seemed like destiny. I had stood in line for tickets with my mom for the first tour and now finally, I might have a chance to see them live. The time to fulfill my rock n'roll destiny was at hand, so the Missus and I snagged some tickets and made a plan for June. The Grandparents (her Mom and both of my parentals) helped wrangle the kiddos and my parentals (very generously) sprung for the hotel and away we went for a weekend in Chicago, culminating with U2, live at Soldier Field.

First: Soldier Field... I hadn't actually been back to Soldier Field since before it was all renovated and modernized and it was something of a struggle to remember what it had used to look like, back in the day. (My general impression was that, like the Metrodome it was showing it's age and kind of a well, dump in it's final, pre-reno years.) Spain vs Bolivia in the Group Stage of the 1994 World Cup was my first visit, this was my second and I was impressed with the renovation. They've done an excellent job preserving the architecture of the old stadium that gave it so much character while improving and modernizing where they needed to for the sake of the modern, commercial aspects of the game (i.e. luxury boxes, etc). I was impressed.

Second: the seats.  While the stadium was impressive, I didn't realize quite how high our seats actually were. At the top. The very top. Row 32. Which was admittedly nice, because there were no people behind- however it was a hike worthy of ascending Mount Everest in terms of the number of stairs you had to climb to get there and get down to things like a bathroom or food. However, the view provided some compensation. We could see the entire Chicago skyline, Lake Michigan and had a great view of the action itself on the field below.

Third: The Lumineers... they're on the radio and I've heard a few of their songs, but wow were they an excellent opening act. (Expect an album or two of theirs to show up in the next few editions of Albums2010 as we race toward our conclusion at #100.) There's something to be said for a band that uses a bunch of tambourines and a cello.

Fourth: the meat and potatoes itself! U2 didn't waste any time getting things going- they launched right into  a duo of tracks from War and one from The Unforgettable Fire (Sunday Bloody Sunday, New Year's Day and Pride (In The Name of Love)) before getting into the main event: The Joshua Tree. The backdrop, which had seemed like a fairly pedestrian back drop up until that point, came alive as videography courtesy of the band's longtime collaborator Anton Corbijn came alive to bring the album to life right there on the field in front of us.

It's one thing to listen to an album on CD or whatever, but it's an entirely different experience to hear that album, live and in person, every song, in order. I don't think I've ever seen anything like that before and I honestly don't think I'll ever see it again,. U2, for the record: is a really, really good band live. When they started in on 'Sunday Bloody Sunday' I think I said, 'Wow' out loud. I don't know if anyone heard me, but it was a spine tingling moment. Goosebumps. Absolute goosebumps.

I love this album, so every song was amazing, but I think 'Bullet The Blue Sky' live...  holy shit. The Edge ate his Wheaties that night because god damn, the guitar on that. Face melting levels of amazing.

They stuck to business for the album portion of the proceedings with only one or two asides by Bono- the encore was where things got a little more political, but not a super annoying way. The overall message was one of love, peace, humanity. He went out of his way to say that everyone was welcome- left, right, no matter who you voted for, which was a genuine touch.

I think everyone has that one band that impacted them growing up- you know, the band or the artist that sticks with you over the years whether you know it or not. There's more than one band perhaps- I think, given the amount of Pink Floyd I listened to on family vacations as a kid, I'd probably have a similar reaction to seeing them live and in person, but man...  I didn't realize how much of the music of U2 has stuck with me over the years. I think a visit to their discography is probably in order, but The Joshua Tree remains one of my all time favorite albums ever. It started this crazy notion of mine off seven years ago and came back around almost at the end of the notion

(For the record: this dethroned Duran Duran in Rome as my all time favorite concert ever. Not that I have that many to choose from, mind you- but between us, the Missus and I seem to have a good track record of picking amazing concerts to go too.)