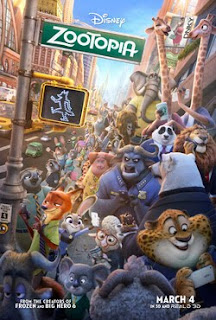 I had heard good things about Zootopia and was kind of bummed I didn't get around to seeing it in the theaters, but when it popped up on Netflix, thanks to a nice double I picked up at work, it seemed like the right time to spin it up and give it a watch- and holy shit was this a good movie. Let me say that again in case you missed it the first time: this was a really, really good movie.

In a world of walking, talking animals, Judy Hopps (Ginnifer Goodwin) dreams of leaving her small town of Bunnyburrow to be a cop in the big city of Zootopia- rabbits usually don't go into law enforcement, so everyone tells her that she'll have to be the first one ever and despite a rocky start at the police academy, she achieves her goal of becoming a cop at the ZPD- and the valedictorian of her police academy graduating class to boot and joins the force. She's relegated to parking duty by Chief Bogo (Idris Elba) who doesn't take her seriously. On her first day, she's hustled by Nick Wilde (Jason Bateman) and Finnick, a couple of con artists.

The next day, Judy ends up in a foot chase with a Weasel who stole some plant bulbs and gets reprimanded for it by Chief Bogo and compounds her troubles by volunteering to help find a missing otter- that almost gets her fired until the Assistant Mayor intervenes and says what a great idea it is. Judy is given forty-eight hours to find the missing otter or she has to resign. Judy teams up with Nick to work the case and soon trace the missing animals to a Cliffside Asylum where the Mayor has hidden them from the public until they can figure out why predators are reverting to their natural, savage state. Judy thinks she ties up the case and with Assistant Mayor Bellweather taking over from the disgraced Mayor Lionheart, Judy is front and center as the public face of the ZPD- but trips up, when she suggests that there might be a biological cause for the recent predator behavior. This makes Nick angry and he leaves, while Judy is wracked with guilt as her comments unleash a wave of protests against predators and she quits the job.

Back in Bunnyburrow, a crushed and disappointed Judy is trying to settle back into life as a carrot farmer with her parents when she meets her reformed childhood bully, another fox by the name of Gideon Grey that reveals something that makes Judy realize a huge mistake and sends her running back to Zootopia to figure out what exactly is causing the predators to go savage- and it turns out the person behind the attacks is the last person you would have expected.

And for the rest of the story, you'll just need to go and watch the movie!

Can I say it again? Let me say it again: this was a really, really good movie. Cartoons can be tricky things if you're an adult. Some of them work on multiple levels (Big Hero Six, The Incredibles) and are intelligent and funny enough to appeal to both adults and satisfy the kiddos you might be wanting to entertain, others... (like say, Penguins of Madagascar) not so much. Zootopia falls into the former category instead of the latter- and in fact, I might go so far as to say it sets the gold standard for intelligent, entertaining animation. You wouldn't expect a cartoon to have something important to say about an issues like policing and racial profiling (conversations about both of those topics always go so well these days) but Zootopia manages to be fun, entertaining and intelligent all at the same time while making some valid points about discrimination and social stereotypes.

Overall: Well-written, brimming with intelligence and entertaining as hell, Zootopia takes a talented voice cast and explores themes that are relevant, timely and important. I'd give it the full five stars, but I did have one bone to pick with this movie and that is the character of Benjamin Clawhauser, the Front Desk officer for the ZPD, who is also apparently the only Dispatcher they have and he's fucking terrible at it! Argh. Some day, there will be an accurate and great portrayal of dispatching on the silver screen that doesn't involve a cheesy Halle Berry movie. But until then, I'll just have to #keepwaiting. **** out of *****