This Week In Vexillology #185

October 08, 2016
Quick, what's the world's only island city-state? If you said, Singapore- you'd be right and that's who we've got This Week In Vexillology: 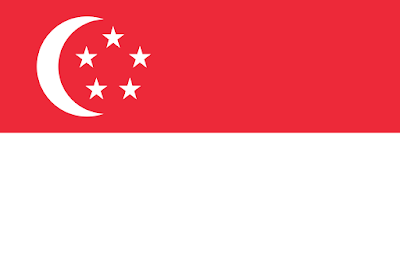 So, Singapore is somewhat of an unusual country- and that's not just because of their somewhat harsh justice system that lead them to cane tourists who vandalize and wreck up the place. The place was founded in 1819 as a trading post for the British East India Company by the excellently named Sir Stamford Raffles. Gaining independence in 1963, they initially joined up with Malaysia- but here's the kicker- they were expelled from Malaysia two years later. Per Wikipedia, there was 'distrust and ideological differences' between the People's Action Party and United Malays National Organization. Whatever the reason, Malaysia told Singapore to GTFO and they did, declaring independence on August 9, 1965.

I'm not sure if Malaysia regrets that or not, but hey, given the fact that the Singapore under the leadership of Prime Minister Lee Kuan Yew went from "Third World economy to First World affluence in a single generation" it's entirely possible they might. Maybe. Just a little bit. (But hey, either way- Singapore is doing pretty damn well by itself, however you break it down.)

It's flag was adopted on December 3rd, 1959 when Singapore was granted self-rule by the British government. There's a fairly comprehensive list of rules on it's use that I'll just go ahead and skip, but happily it's got a pretty detailed explanation of it's symbolism as well:

The red (upper) half, stands for universal brotherhood and the equality of man. The white (lower) half for pervading and everlasting purity and virtue. The crescent moon and the five white stars form a circle- the five stars are for the ideals of democracy, peace, progress, justice and equality.

(In terms of milestone's for the country, they scored their first gold medal at the Rio Olympics when Joseph Schooling pulled the stunning upset of Michael Phelps of all people. So it's been a good year for Singapore. Plus, this is the country that gave the world the Singapore Sling, which is delicious and legendary.)

And that's the flag of Singapore! Remember, until next time keep your flags flying- FREAK or otherwise!