This Week In Vexillology #188: The Pine Tree Flag

October 29, 2016
This Week In Vexillology, there's no school like the old school. For Week #2 of the Brown Flag Challenge, we're going all the way back to the American Revolution with...  the Pine Tree Flag: 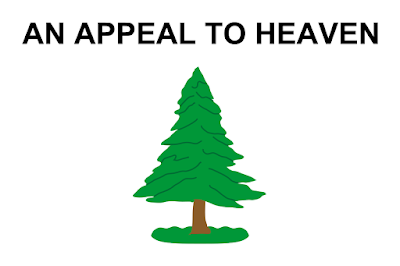 Fans of the excellent HBO Series John Adams will probably recognize this flag from the opening credits- while I think the more popular Revolutionary flag these days is probably the Gadsden Flag (the snake that says 'Don't Tread On Me') this one ranks right up there in the Revolutionary Pantheon.

(Just as a design tangent: A lot of design critics, especially of State Flags hate writing on flags and the whole 'seal on a bed sheet' thing that a lot of states seem to dig, but, you could argue that in the case of the whole 'writing on flags' thing there's some deep historical roots here that date back to the founding of the Republic. So from a historical point of view, America's preoccupation with writing on their flags might make a certain amount of sense.)

But, back to the Pine Tree Flag! Adopted on October 20,1775 the flag was used by a squadron of six cruisers commissioned by the man himself, George Washington as well as the state navy of Massachusetts and privateers that originated in the Bay State. The tree in question, is specifically a New England White Pine, that could grow up to 150 feet high and was highly desired by shipbuilders when they were looking for masts. (Which might also explain why this was used in Naval and Maritime Settings.)

In the run up to the Revolution, England being England and all about the whole taxation without representation thing cracked down on the lumber trade, marked all the mast-worthy trees with a 'broad arrow' symbol that made them property of the Crown. They sort of kind of enforced that for awhile since England had closer sources of lumber for a few years, but when those dried up, suddenly they got serious about it- and the Colonists got pissed off. New Hampshire had it's (amazingly named) Pine Tree Riot in 1772 which was two years prior to the Boston Tea Party even going down. Tea in the harbor may have really started the ball rolling, but the real resistance began over Pine Trees...

The phrase on the flag, 'Appeal To Heaven' is a reference to the right of revolution used by John Locke in his Two Treatise of Government which refuted the whole divine right of kings thing. (And, man, can I say how refreshing it is to read about the underlying philosophy of any given issue. We need more philosophy in our political discourse today. BRING BACK CICERO, damn it.)

And that's the Pine Tree Flag! Our brown flag challenge continues next week, but until then, remember to keep your flags flying- FREAK or otherwise!