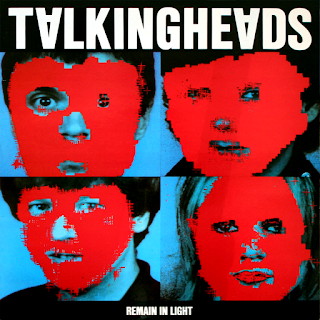 Talking Heads has always been one of my favorite bands. Maybe not my all time favorite band ever, because I'm honestly not sure I have one, but they've always been somewhere in my person top ten. When I was kid, Dad's copy of Stop Making Sense would pop up in the CD player now and again at various family parties and once I got old enough to purchase CDs all by my lonesome, I snagged Sand In The Vaseline and loved every track on it.

[Pop culture tangent: If you have no idea who Talking Heads are, well- there's that one scene in Revenge of the Nerds, that other scene in Clerks II and of course, if you're a fan of rock n'roll/concert movies, there's Stop Making Sense.]

But the one thing I haven't actually done is dig into their discography all that much. Sand In The Vaseline and Stop Making Sense provided me with a plethora of Talking Heads and it kept me satisfied, up until now. I'm not sure what got my started on my latest 'Heads binge, but a quick google search for the best Talking Heads albums pointed me in the direction of Remain In Light, so I hopped onto my Spotify, tracked it down and gave it a whirl.

And you guys...  seriously. You guys. This is a really good album. Like a really fucking good album. To me, this ranks right up there with U2's Joshua Tree, Bruce Springsteen's Darkness On The Edge of Town and Rolling Stones' Exile On Main Street, Fleetwood Mac's Rumors....  I loved every minute of this beast and if you like great music, it's worth a listen- if you like Talking Heads and you're not a lazy fan like I am, you've probably already listened it many times over, but if you haven't gotten around to this one, get to it!

So, Remain In Light:

I did some digging on Wikipedia and the big idea behind this album was that the band wanted to dispel the idea that Talking Heads was all about David Byrne who was just sort of leading a back up band. If that was what they were aiming for, I think they hit their target, because the staggering amount of fusion and blending of a whole variety of musical genres makes for a truly syncretic experience. There's elements of African music, other world music, post-punk, new wave, funk, experimental rock- it's amazing.

The album opens with 'Born Under Punches (The Heat Goes On)' which has a hook that worms it's way into your brain and is impossible not to dance too. 'Crosseyed and Painless' has long been a favorite 'Heads track of mine- and the break down/rap at the end of the track seems especially appropriate, given the long train wreck of an electoral disaster we're all facing. ("Facts are simple and facts are straight/facts are lazy and facts are late/facts all come with points of view/facts don't do what I want them to/facts just twist the truth around") 'The Great Curve' brings an Afro-beat sensibility to the album with a great lyric, "the world moves on a woman's hips" that sticks in the brain. 'Once In A Lifetime' is a Talking Heads classic but that gets followed up with 'Houses In Motion' (another one of my favorites from this album) and then 'Seen and Not Seen' and 'Listening Wind' all of which play around with Middle Eastern sounds.

My digging on Wikipedia revealed something wild about the final track on the album, 'The Overload.' The verbatim quote:


The final track on the album, 'The Overload' was Talking Heads' attempt to emulate the sound of British post-punk band Joy Division. The song was made despite no band member having heard the music of Joy Division; rather, it was based on an idea of what the British quartet might sound like based on descriptions in the music press.

How wild is that? And more importantly- how crazy is it that they got relatively close to the overall sound of Joy Division? Mind. Blown.