This Week In Vexillology #187: The Brown Flag Challenge Begins

October 22, 2016
So I realized that last week that I was running out of flags to talk about and thus realized that I was going to have to get creative to get this train rolling and happily, the Missus and her interior design skills provided me with an answer. You see, we had company come up last weekend for Little Dude's Birthday, so that meant we needed to get our spare bed from the Parentals House to set it all up in the basement. Which was easy enough, but it still looked a little sparse and well, open- like an unfinished basement. Obviously, the first thing I thought about was flags. I have a tote full of the things and while it wasn't a perfect solution, it'd work for a weekend. I asked the Missus what color scheme was she envisioning, she replied red, green and brown.

This is what resulted: 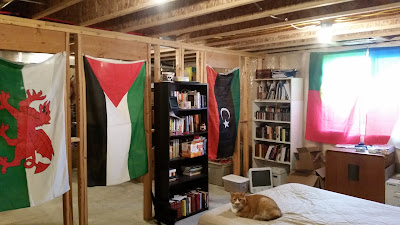 I have plenty of flags with red and green, but I came up short when it came to the color brown and after one hundred and eighty six flags, I realized that I couldn't really recall any where brown featured prominently. So, I did some digging on the interwebs, found a list and The Brown Flag Challenge was born...

I was surprised, because I had actually encountered some of these flags before. Iowa, technically has brown in it's flag. So does Dominica. But there are plenty of other flags that I hadn't touched yet- so that's the list we're going to work our way through- starting with the flag of the great, Golden State of California: 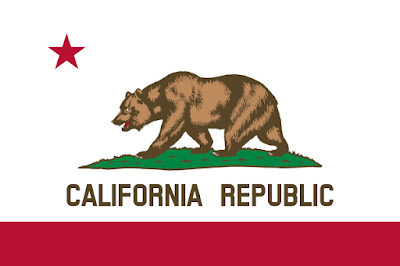 The origins of this flag can be traced to the very short-lived, totally unrecognized breakaway state of the California Republic, which lasted for about twenty-five days in 1846 and controlled the area north of San Francisco, mainly centered around Sonoma. It's flag looked like this: 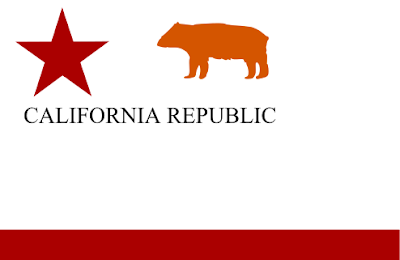 (You can sort of see where they got the basic idea from, right?) Anyway, for obvious reason, this came to be called the Bear Flag and the revolt, short as it was, became known as the Bear Flag Revolt and we'll never really know what might have happened to the California Republic, because the Mexican-American War sort of took over events pretty fast and the Republic's Military was subsumed into the California Battalion commanded by Captain John C. Fremont (who is actually a really interesting guy. I read this book about him- which I think I still have somewhere. Maybe. It was really good and you should read it though) and by July 9th it was all over and California became part of the Untied States.

Here's the crazy thing though. California became a state in 1850 and the current, official version of the Bear Flag was first adopted in 1911. I did some digging on the interwebs, because Wikipedia didn't have the answer and you know what? I'm not sure that California had an official state flag between 1850 and 1911. There was a little bit of a brouhaha during the course of the Civil War where pro-secessionist people down south flew the Bear Flag instead of the Stars and Stripes and it's all... a bit mysterious.

The bear itself is supposed to be modeled on one of the last California Grizzly Bears in captivity named Monarch who was captured in 1889 by a newspaper reporter at the behest of guess who? William Randolph Hearst. After it died in 1911, it was stuffed and preserved at the Academy of Sciences at Golden Gate Park and as far as I know, it's still there which is a very cool piece of trivia. The Bear Flag has some detractors, but the North American Vexillological Association ranked it as #13 in their survey of flags of North America, which seems about right to me. It's design is simple and evocative and to be honest, if you look at all the state flags- California would be one that I would want to add to my collection. (Hey, speaking of which: why don't I have any state flags? I should remedy that.)