This Week In Vexillology #166

May 14, 2016
So, This Week In Vexillology, we're still in the South Pacific and looking at the flag of the pleasingly-named nation of Tuvalu. (Seriously, it really is an awesome name. Just rolls right off the tongue. Tuuuuuuuvalu.  Tuvalu!) 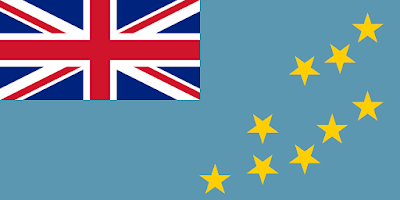 Adopted on April 11th, 1997 for national usage, the flag of Tuvalu reflects it's status as a former British Colony with the Union Jack present in the upper left canton- however, unlike a lot of other former British colonies, the field of the flag is sky blue instead of a more conventional, dare I say, British blue.

The nine stars in the flag represent the nine islands that make up Tuvalu- and here's the slightly cool thing. The arrangement on the flag is actually geographically correct- with the east being toward the top. There's also a little bit of a linguistic disconnect, as the name Tuvalu actually means 'eight together' but population pressures lead to the settlement of a ninth island- so they added a ninth star. (The islands are: Nukulaelae, Funafuti, Vaitupu, Niulakita, Nukufetau, Niutao, Nui, Nanumanga and Nanumea, just for your general knowledge and information! Impress your friends! Show off at parties, that kind of thing, etc, etc)

Originally part of a British dependency known as the Gilbert and Ellice Islands, the two groups of islands voted to split in 1974- with the Ellice Islands becoming Tuvalu and the Gilbert Islands becoming the independent nation of Kiribati after independence. Obviously (again with the Union Jack) Tuvalu remains a Commonwealth realm and a constitutional monarchy with Queen Elizabeth II being the current Queen of Tuvalu.

In 1995, Tuvalu took a star away so they could solve that linguistic disconnect we talked about earlier and actually have the flag reflect the 'eight together' meaning of the name. People weren't crazy about that, so they replaced the flag with this one: 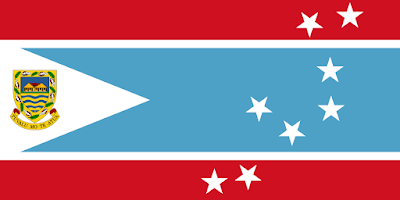 Well, if people weren't crazy about dropping the ninth star, people hated this one and it lasted little over a year- people felt that this flag was a move toward replacing the monarchy with a republic, so it lasted for 1996 and a wee chunk of 1997 before the original flag was restored- along with the ninth star

And that's the flag of Tuvalu!