May 30, 2016
Back to Islay we go in this month's edition of Boozehound Unfiltered, this time to take a taste of a scotch that styles itself to 'the richest flavored Islay' of them all- yes, it's the Laphroaig 10 Year Old: 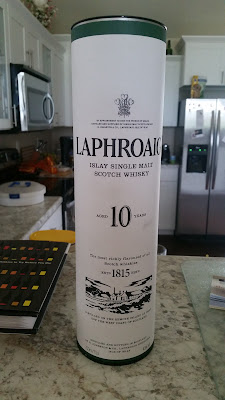 You know, I've had this stuff before and it didn't really stand out in my mind all that much, which is surprising, given how tasty I found it to be this time around. While Lagavulin might embrace the smokiness of the peat along with Ardbeg, I found Laphroaig to be a more complex dram than I was expecting. Yes, the ever present pete was evident, but it wasn't a slap in the face. It wasn't overwhelming either. It was, in fact, quite pleasant to drink.

Let's break down a toponym, shall we? There's some gaelic elements worth touching on: lag (hollow) breid (Norse: broad), vik (Norse: bay) which gets you something like 'Lag Bhrodhaig' or the Hollow of Broadbay. Another theory is that it could be related to a place name on the East Coast of Islay called Proaig (again: Broad Bay.)  Somehow, out of all of that, you get Laphroaig.(It's also the only whisky to carry the Royal Warrant of the Prince of Wales- apparently Prince Charles likes the 15 year old Laphroaig, which almost makes it worth tracking down a bottle.)

There's also this really cool Friends of Laphroaig Club, which can land you 1 square foot of land on Islay itself. (Might have to put this in the old rolodex for future reference/possible birthday/holiday gifts for various people as well.)

Body: It's light and floral...  maybe it's my nose and it's lack of refinement, but I kept wanting to say 'honey' but instead thought maybe, just maybe, hints of maybe something like citrus peel or a crisp, refreshing fruit- maybe melon? It's an Islay, so the peat is evident, but unlike say, Lagavulin or an Ardbeg, it doesn't punch you in the face. The peat seems somewhat restrained and imparts a spicy flavor instead of the overwhelming sensation of smoke.

Palate: It sits lightly on the tongue- not in a weak and watery way, but just nicely. The peat takes center stage here and spices things up nicely.

Finish: Not harsh- which is surprising for an Islay in many ways. The peat is there but the warming is gradual and pleasant.

Overall: After seeing this review on Master of Malt, I sort of second guessed my initial round of tasting notes for a minute or two, but then I well, third guessed myself because what if it's confirmation bias, you know? You read a description and then your mind starts hunting for it and then eventually agrees with it- which is what I sort of found myself doing when I did another tasting last night. Either way, as single malts go, this is a solid B+