Cooking Around The World: Venezuela

May 20, 2016
So, awhile back the Missus and I started this tradition with Little Man, where he goes and gets the globe out, closes his eyes, we spin it and wherever his finger lands, that's the country we make a meal from one night a month, learn some basic facts about a country (I usually have an excuse to get online a buy a flag, which doesn't exactly displease me) and all in all, it's usually a lot of fun. This month, we tackled Venezuela! 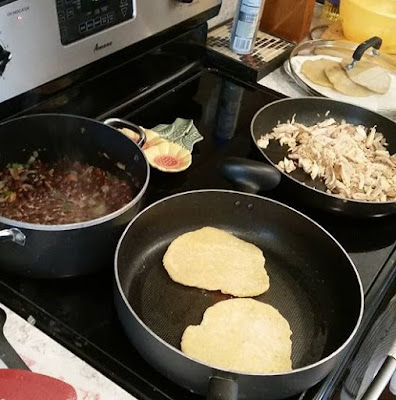 On the menu: arepas! Okay- we made one big mistake with these guys right off the bat: we got the wrong flour! We kept seeing all these recipes say over and over again, 'masa harina is not the same thing as arepa flour' and 'arepa flour (precooked cornmeal)' so we went ahead and got cornmeal...  yeah.  Not the right thing to get. I dutifully mixed my two cups of cornmeal with some salt and added two cups of water only to end up with soup. Happily, we had a bread expert on board for the evening (the Madre) who saved us with some flour and we sort of kind of improvised our way to something between an arepa and a tortilla. Honestly, I want another crack at these bad boys, because I feel like we didn't do the arepa justice- but we kind of sort of arrived in the right area.

For the filling: La Reina Pepiada! Now this turned out beautifully- honestly, if you're looking for a halfway decent chicken salad recipe, I can recommend this. Totally delicious.

The side dish: caraotas negras! I want to make these again, because they were pretty damn delicious and as with the arepas that served as the main dish- I think I can do a little better next time as well.

We were going to do a dessert (this bad boy) but we ran out of time and decided to go with what we had and grab some non-dairy ice cream instead.

All in all: I'd go back to Venezuela again- and (in a somewhat impressive first) Little Man actually really liked his arepa and chicken filling. So I think we could give this a shot again pretty easily if we wanted too. After all, it's about getting him different food to try and expanding his (and our) horizons a little bit. (He even picked a country for next month- but you'll have to wait and see what it is!)

I kind of sort of get that idea- but I also think there's a quantitative difference between someone like Bayless (who's been to Mexico, done his research, done his homework and is generally accepted to know what the fuck he is talking about with this stuff) making Mexican food and say someone like me, randomly opening up a Mexican restaurant and calling it 'Authentic Mexican Food.' It would be cultural appropriation if I did, less so if Bayless did it.

Then you've got to look at the notion of what happens to food that immigrants bring to this country. (Pashman actually moved into firmer ground here.) We pay more for Italian food because well, we have a different perception (at least now) of Italian immigrants than we did when we first got here. A generation from now, what will we pay for Mexican food? Or Chinese food? I think food evolves over time as immigrant communities grow and shift in whatever part of American you're in. I'm sure where there are more Indian-Americans, you'll get more Indian food and better varieties of it. Like wise, I'm sure you can find fantastic Mexican food or Chinese food in places where those immigrant communities have deep roots. Iowa, while it has a rich history, doesn't really have that. Unless you count Germans or Czechs.

Anyway- it's a fascinating discussion and you should go track it down and listen to it. It's worth it.