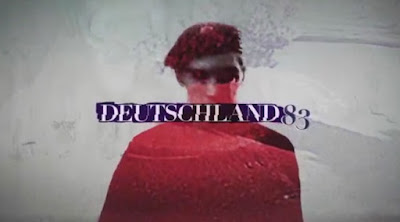 You know, I'm not sure where I first heard about Deutschland 83. Could have been a random article on io9.com or Slate.com but man, am I glad I tracked this down on Hulu and watched it. Broadcast on the Sundance Channel over in the United States, Deutschland 83 is a German import that should rank right up there with The Bridge and The Killing as excellent pieces of television- even more so when you consider the fact that the show only has eight episodes to work with and a ton of story to tell.

Set in West Germany in 1983, Deutschland 83 opens with a young East German soldier by the name of Martin Rauch (Jonas Nay) who gets sent undercover to West Germany to serve as an aide-de-camp to Major General Edel (Ulrich Noethen) who is a high ranking General in the Bundeswehr (West German Army.) He's given a new identity (Moritz Stamm) and a code name (Kolibri) and begins to pass information back to his handlers in East Germany. Initially, he's pretty reluctant: his mother, Ingrid (Carina Wiese) needs a kidney transplant and he's got a serious relationship going with his fiancee, Annett (Sonja Gerhardt) but his Statsi handlers, one of which includes his Aunt, Lenora (Maria Schrader) provide him with motivation: Mom goes to the top of the transplant list and his fiancee gets well taken care of.

Martin's first missions don't go so well: homesick, he calls his fiancee back home and almost gets caught by the sister of the General's wife. The fact that she's pretty drunk at the time sort of saves his ass. He breaks into a hotel room to steal a report from a NATO Analyst and gets the shit beaten out of him by an Asian female, whom I'm guessing is also a spy? He plants a bug in the NATO High Command, seducing a secretary to do so. (Plot Twist: doesn't end so well for the Secretary.) In short, he's a spy and does spy stuff- which would be relatively interesting in and of itself, but where the spy stuff goes down and when it goes down is what takes this show into another stratosphere of tense, twitchy and paranoid.

We tend to forget in these post-Cold War days that back in the day Germany sat, divided in two on the front lines of the Cold War itself. People tend to forget how close geography can be in Europe. Handy-dandy Google Maps will tell you it's about 372 miles between Berlin and Bonn- which is pretty close to the equivalent distance between Iowa City and Lincoln, Nebraska. Not- in the grand scheme of things all that far apart. And in 1983, East German paranoia was running particularly high. Everyone thought Reagan was a lunatic hell bent on nuclear war and the announcement of the deployment of Pershing II missiles to Europe didn't help ease tensions. But it's when NATO decides to hold an exercise called Able Archer that things really get bananas: East Germany and by extension, the Soviets become convinced that it's a cover to launch a preemptive nuclear strike against them. Martin, however, knows differently.

And it's here that Deutschland 83 really gets great. The build-up to the final few episodes as Martin first has to convince his handlers that Able Archer is just an exercise and then, in desperation, race home to do the same thing moves at a break neck pace and proves that even decades after the end of the Cold War, there's still more than enough life in the old 'twisty, tense, paranoid Cold War espionage' thriller genre.

Per the show's Wikipedia page, there's rumors of a second season, Deutschland 86 (set three years later) which would lead into a third season Deutschland 89. Really hoping that's true and not just wishful thinking on Wikipedia, because that would be a fascinating arc to explore. Not being German, I'm not sure how accurate the show's portrayal of 1980s Germany actually is- in terms of pop culture, cars, overall aesthetic and the like. But the events are real and the show is a fascinating exploration of a viewpoint of the Cold War that few Americans are used to seeing.