This Week In Vexillology #164 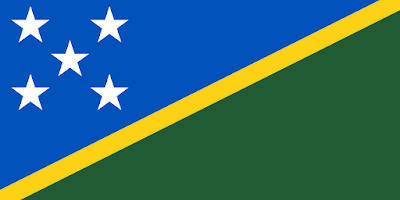 This Week In Vexillology, we're sticking around the South Pacific and taking a look at the flag of the Solomon Islands. Adopted on November 18th, 1977, the five main island groups are represented by the stars. The blue stands for the surrounding ocean, and the green in the flag represents the land. You might think (like I did, initially) that the yellow stripe stands for sand along the beaches- but it doesn't- it represents sunshine.

As for the Soloman Islands themselves- well, military history buffs might remember the Battle of Guadacanal back in World War II- the capitol, Honiara is located there. The Spanish discovered them in 1568, the British came around 1893 and sort of took over the place. They achieved self-government in 1975, became independent in 1977 and are currently a Constitutional Monarchy with Queen Elizabeth II serving as the Queen of Soloman Islands (one of the many hats she wears as part of the whole Commonwealth thing.)

There was a bout of ethnic tension between 1998-2003 that got pretty nasty. (A kaleidoscope of Pacific Nations, including Australia and New Zealand) ended up sending about 2,000 troops and police to help calm things down- but other than that- which, I imagine from their point of view would be a pretty big 'that'- post-independence has been fairly uneventful for the Solomons.

Their flag is pretty boss too.