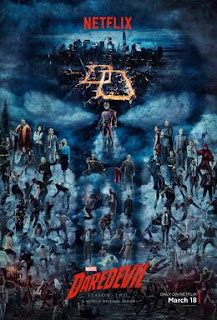 I was planning to drop this review in May- I dipped my toes into Occupied and Deutschland 83 and was liking was I was seeing, but once I saw the season premiere of Daredevil, I was immediately sucked back into the show- and, as with most things on Netflix, once you start, you just can't stop. Did the second season live up to the excellence of the first? In many ways, yes- in some ways no- but, I have to admit after a somewhat uneven middle stretch of the season, they pulled things back together for an excellent finale.

As the season opens, Nelson and Murdock are enjoying new found fame following their victory over Wilson Fisk and seem to be heading back to the daily grind of trying to pay their bills and help their clients, many of whom pay via things like pie instead of actual, you know, money. But a new arrival when a new arrival in Hell's Kitchen disrupts the peace, Nelson, Murdock and Karen Page- the sort of core triumverate of the show find themselves split apart by events almost beyond their control thanks to that new arrival: a new vigilante by the name of The Punisher.

The first four episodes build up to one hell of a conclusion to the first 'act' of the season- that debate on the rooftop in the 3rd episode where Daredevil (Charlie Cox) and The Punisher (Jon Berenthal) talk about their stark differences in methodology was a fascinating deconstruction of the whole notion of a superhero that surprised me. For all the different mediums you have the superhero ouevre on these days, rare is it where you actually get two of them hashing out and trying to justify what makes them a superhero versus just another vigilante.

Of course, that makes the fact that Murdock and Nelson end up defending Frank Castle when he is put on trial all the more interesting- because while Castle refuses to show mercy to those he considers criminal, Murdock's insistence upon it and his belief in the idea of justice deepens the central contradiction of the character and makes him feel even more three dimensional than he already did.

The middle-to-back half of the season focuses on the arrival of Elektra Natchios, a former old flame of Matt's who practically jumps off the screen at you, thanks to a thrilling performance from Elodie Yung. Don't get me wrong: I like Jennifer Garner. She was excellent in Alias and a multiplicity of other things, but Elodie Yung's performance pretty much made the character of Elektra her own. While this run of episodes gives us some payoff to the hints dropped last season with the arrival of Stick (Scott Glenn- also back and bad ass as usual) and the return from the dead of Nobu, who isn't just a Yakuza ninja anymore.

Did the payoff, such as it is, work? Yes and no. The season sort of stretched a little too much in the middle run, I thought- there was a lot of ninja action that was a lot of fun to watch, but less of the courtroom drama and interaction between the central core characters of Nelson, Murdock and Page was sort of disappointing. Murdock is off running around with Elektra doing his ninja thing and can't just tell his friends what's going on. It's frustrating. (We saw a similar thing in the first season when Page killed a dude. She's given opportunity after opportunity to confess and just tell someone and doesn't. It feels inexplicable and equally frustrating.)

I was sort of worried about it for a few episodes- but the build-up to the finale brings the focus back onto the story and the ninja antics pay off in a very satisfying way. Where are Nelson, Murdock and Page by the end of the season? Well, Nelson and Murdock is no more- and it's Nelson that seems to be coming out on top in terms of career advancement. Page finds what could be an actual career as an investigative journalist- which is an amazing step forward for her character. The Punisher is left in an interesting place- as is Daredevil. I'm honestly not sure where they're going to take the (presumed) third season of the show, but I can't wait to find out.

Overall: While a little uneven in the middle, Daredevil delivers a solid sophomore outing with some moments of true epic excellence. Netflix and Marvel seem to be a match made in heaven and they haven't let me down yet. *** out of ****