This Week In Vexillology #161

April 09, 2016
This Week In Vexillology, we're wrapping up Europe with the flag of Austria- which, fun (and probably apocryphal) fact might be one of the world's oldest flags with an origin story that dates all the way back to the year 1191. 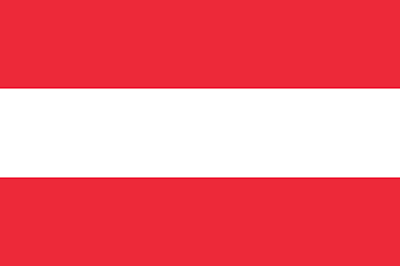 Adopted on May 1st, 1945 for national and civil usage, the flag of Austria was held over following the fall of the Hapsburg Empire at the end of World War I- and the two red stripes with a white stripe in the center have been associated with Austria for centuries. Story is that a Duke of Austria once fought so much in battle his white surcoat ended up soaked in blood except for the part that was covered by his belt. Why anyone would think that wearing a white surcoat to a battle- especially all the way back in 1191 where leaders you know, actually still had some skin in the game as a posed to watching proceedings from a tent well back from the fighting- is beyond me, but that's what the dude did and that's how we ended up with the flag of Austria. His ruined surcoat and his belt that saved the tiny part of it that remained white. (What, I wonder would have been have been the dry cleaning bill? And did they even clean clothes back in 1191?)

And that's pretty much Austria in a nutshell from the point of view of it's flag. But while it's days of Imperial Glory are behind it, it still gave the world the Danish pastry, the Wiener Schnitzel (which until very recently, I always assumed was a sausage of some kind. it's not) and the great Hermann Maier- who's career was much better than this crash in Nagano, which seems to inevitably show up in the Winter Olympics highlight reel every four years. Oh and don't forget about The Sound of Music either...