This Week In Vexillology #163 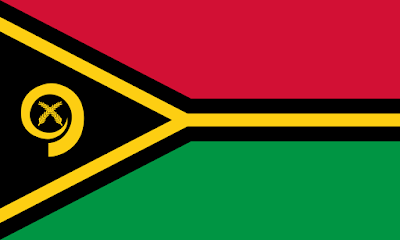 This Week In Vexillology, we're sticking around the South Pacific and taking a look at the striking and kind of awesome looking flag of Vanuatu!

First discovered by Europeans in 1606, it nearly another two centuries and another two visits before the archipelago was finally given a name that stuck, courtesy of Captain James Cook, who named them the New Hebrides. Over the subsequent centuries both Britain and France claimed parts of the island chain, which lead to the establishment of a unique power sharing structure between the two powers which only came together in a joint court. Melanesians on the islands could not get citizenship of either power. (This is actually really unusually and unique- I can't say I've ever come across a joint-agreement between two powers like this before. Interesting.)

After World War II, nationalism grew with the arrival of- who else? The Americans! (And gave rise to a cargo cult named John Frum which is now a political party in the government.) The first political party was established in the 1970s, eventually becoming the Vanua'aku Pati after independence was won after...  the Coconut War.

(That's a pretty much a TL;DR of the interesting stuff I could glean about Vanuatu...)

But now, the FLAG!

Adopted for national and civil usage on February 18th, 1980, the colors of the Vanua'aku Pati (the political party that lead the fight for independence) were chosen to be the basis of the new national flag and a parliamentary committee chose the final design based on submissions from local artists. The green in the flag represents the richness of the islands, the red is for the blood of wild boars and men, black is for the people. The Prime Minister of Vanuatu at the time, Father Walter Lini wanted the inclusion of yellow to make the black stand out more. The yellow 'Y' represents "the light of the gospel going through islands." (The overwhelming majority of residents are Christian.)

The tusk/laurel leaf emblem on the hoist is interesting. The tusk is for a boar- which is a symbol of prosperity on the islands. The leaves are from a local fern and represent a token of peace- if you look real, reaaaaal close you'd count 39 leaflets- which represent the 39 members of Parliament in Vanuatu.

Remember, until next time- keep your flags flying- FREAK or otherwise!