Serial Saturday: Some Thoughts "On Murder In Kinmen"

So, here's the full story on Murder In Kinmen:

It started life as a Theme Thursday response- the theme was Vulnerability and when I started kicking around ideas about how I wanted to approach that, for some reason the idea of geography lodged in my brain. The Cold War is over, so you can't use places like West Berlin or anything like that, but surely, there must be someplace where the residents have to live with or at least be comfortable living with vulnerability.

For some reason, I remembered learning about one of the innumerable crises in the Taiwan Straits and especially the standoff of Quemoy and Matsu. I assumed that they were under Chinese control for some reason, but I checked a map and to my astonishment, they remain under Taiwanese sovereignty even today. So imagine then, living in a place like Kinmen- which isn't a way out to sea and just close to China, like Mainland China is right there.  Check out this map: 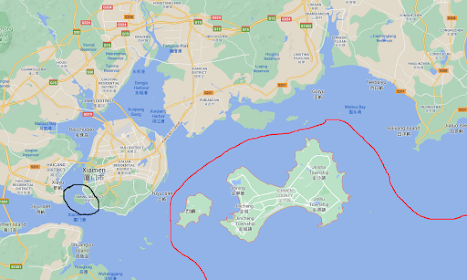 Can you imagine that? Being that close to a rising superpower with a large and bellicose military that wants to forcibly incorporate you back into China as a whole? What must that feel like? Do you just deal with it and get on with life? Everything on the other side of that red line is the Republic of China. Still, think it doesn't seem that close? Check out the real-world shot: 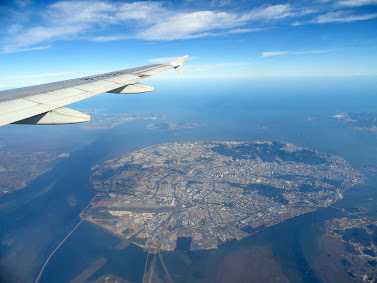 That island in the background of the big round one? The one that's right under the far end of the wing of the plane? That's Kinmen. So naturally, that was enough for me- and then, everything just kind of flowed from there.
The research was absolutely key for this one. I spent inordinate amounts of time on Wikipedia and Google Maps- because I don't speak Chinese and when this turned into a full-blown serial, I realized that I had to do the work to make this story happen. I've never been anywhere near Kinmen, so research research research was key. The outlying islands, descriptions of police precincts, and more or less where they're located- courtesy of Google Maps.
Do I think I got all the details of the police aspects correct in this story? Probably not. If I'm going to turn into a real novella and get it out in the world, I'm going to have to do more research to lend it authenticity. I fully admit to leaning on real-world experience somewhat. There's a certain kind of universality to the language used in law enforcement that will at the very least lend the narrative a certain amount of authenticity. (At least, I sure hope it does.)
Fascinating things I learned along the way:
So many artillery shells were dropped on Kinmen they use the leftover shells to make very famous and very nice-looking kitchen knives.
That island circled in black? It's Gulangyu, known for its pianos, its lack of cars- they're banned on the island- and it was the former site of the American consulate when Europeans nobbed on the island back in the day.
They actually do sell tea-eggs in 7/11 in Taiwan. Also, there are 7/11's in Taiwan.
Did Chiang Kai-Shek write something on a mountaintop in Kinmen? Apparently? They certainly preserved some characters on a big ass rock on top of a mountain- so I'm going to say yes.
The government agencies described in this serial are as accurate as I can make them.
Self-criticisms: without meaning too, I had three characters with pretty much the same name: Pei-Shan, her twin sister Mei-Shan and the hacker/assistant spy Shan. Totally did that without meaning too by the way.
This is probably also the first time I've played around in the genre of "muuuuuuuuuurder!" and as a result, I don't know if I managed to pull of the necessary stuff you need to make a good mystery. I feel like my last part landed really nicely, but I also feel that the big reveal was more anti-climactic than it really should have been.
So, what now?
Well, I've got a pile of words and I'd like to beat them into a better shape than they currently are. Books are hard to write and I think this year with my writing I want to try and push the boat out and get more writing out there- not just to publications but for readers as well. This serial worked for Reddit- it would take a lot of beating and banging and forging anew to get into say, a novella shape good enough to get out there for readers to actually consume.
I've got another serial floating around out there already- so I'll be taking a couple of weeks off and the next serial is going to launch on the blog on March 27th. This one will hopefully be, well... better and it's certainly a change of pace from Murder In Kinmen.
If you've actually been following along with these posts- or are a Reddit reader that caught some of it as I was flinging it out into the world for the very first time and came to check out a full read-through, I hope you've enjoyed this a wee bit. It was fun writing it, I can't wait to sit down and revisit it and see if I can turn it into something more cohesive that can be an actual novella for the world.
Until the 27th!