Raya and the Last Dragon tells the story of the land of Kumandra, which is ravaged by the Drunn, evil 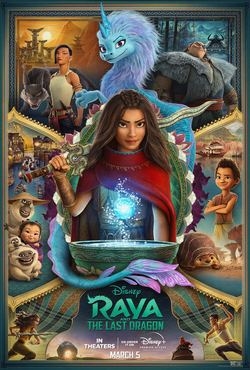 spirits that petrify people and multiply after they absorb someone's life force. In a desperate last stand, the dragons of Kumandra combined their remaining magic to ward off the Drunn and revive all the humans, but in the process, they turn to stone themselves. Naturally, the orb survives- so the once united nation of Kumandra splits into competing tribes, based on their placement around the great river that resembles a dragon: Fang, Heart, Spine, Talon, and Tail.

Five hundred years later and the Heart tribe are the guardians of the orb and Chief Benja (Daniel Dae Kim) is training his daughter Raya (Kelly Marie Tran) to guard the orb while at the same time summoning the other tribes in an attempt to bring the nation of Kumandra together once more. It's a little tense at first, but Raya breaks the tension by befriending Namaari (Gemma Chan), the daughter of Chief Virana (Sandra Oh) of the Fang tribe. Namaari gives Raya a dragon pendant as a gift and deciding to trust her, Raya shows Namaari the orb. This proves to be a mistake, as Namaari summons other members of her tribe to steal the orb. The other tribes show up too and in the struggle, the orb is shattered into five pieces and each tribe flees with a piece as the Drunn reappear. Benja is among the casualties and sacrifices himself to save Raya.

We jump forward six more years and Raya is attempting to find the last surviving dragon, Sisu so she can use her magic to reform the orb and save the land from the depredations of the Drunn. In the territory of the Tail Tribe, she manages to summon Sisu (Awkwafina) who tells her that it was the combined magic of all the dragons that created the orb- so she can't create a new one, but if the pieces are reunited, she can use the orb's powers. Sisu and Raya recover the piece from the Tail Temple and evade Namaari and her soldiers to link up with Boun (Izaac Wang), a ten-year-old running a boat restaurant by himself in Tail Land. They gather other allies as they recover the other pieces including Little Noi (Thalia Tran) and her trio of monkey-like companions, the Origis, Tong (Benedict Wong), a warrior giant from Spine- eventually, they get all the pieces except for Fang's and have to have one final showdown with Namaari- and Raya is forced by Sisu to confront her lack of trust and faith in other people.

Raya and Namaari find a way to trust each other and the team sacrifices themselves to the Drunn to activate the orb-- this works and drives away the Drunn. Everyone is restored- including all the dragons and all the tribes come together to make Kumandra again.

What can I say? It's Disney and they're very, very good at what they do. The land of Kumandra is inspired by Southeast Asian cultures- including Brunei, Singapore, Laos, Thailand, Timor-Leste, Cambodia, Vietnam, Myanmar, Indonesia, and the Philippines and they do an excellent job at bringing that area of the world to life- how excellent I don't know, because I've never been to Southeast Asia and am not super familiar with all the cultural niceties, so I can't say how well they managed to do it, but it seems pretty excellent to me.

The story is excellent- I especially like the post-apocalyptic vibe after the orb splits apart- there's a shade of Mad Max with Raya being the lone gunslinger traveling around, trying to put the world back together. The Drunn has impacted everyone and even the environment of Kumandra, so there's a certain amount of urgency to their quest that keeps the story moving along nicely. Raya and Namaari are at the center of the story- and their inability to trust one another is the key conflict of the story. Sisu makes for an engaging dragon and will launch a thousand toys, as is tradition with Disney movies- and the story teases you a bit about the real focus of the story until the end- and then, refreshingly for Disney movies, it becomes Raya's story- and not just hers, Namaari's and everyone else's story in the end as well.

Overall:  it's an amazing-looking movie, an entertaining story, and the old Disney magic clicks into place just fine. I don't know where it would rank in the pantheon of Disney movies but the kids have already watched it at least twice and as an adult I was entertained. My Grade: *** out of ****