Normally, I don't include the bedtime books I read to the Eldest Spawn on the blog. But after several 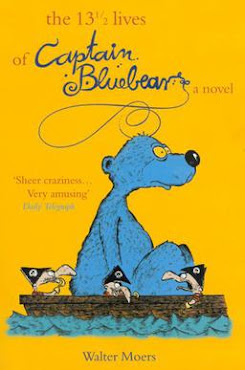 Redwall books and some 'mice/badger/small furry animal' fatigue set in, we decided after The Bellmaker to switch it up a bit and find something else to read to him that he would hopefully enjoy. The Missus and I did some googling, looked around and the Missus found The 13 1/2 Lives of Captain Bluebear on Amazon and we both thought it looked interesting enough that we decided to give it ago.

So, I figured, I was going to read (along with the Missus) a 704 page book out loud, it was a feat worthy of a book review.

When the title says 13 1/2 lives, it more or less means it. Each 'life' constitutes a part of the book and they range in length from the eminently reasonable (Life #8, the 1/2 Life at Peace) to the insanely long and interminable (Life #6, parts of Life #13). But, the story of Captain Bluebear begins with Life #1, where he's found floating in a walnut shell in the nroth Zamonia Sea near the Malmstron- a mysterious, gigantic whirlpool that the sailors of the world take care to avoid. He's saved from that fate by a crew of Minipirates who are mysterious in their ways and adopt him as a good-luck charm. He grows up on seaweed and water and learns the ways of nautical living before getting too large for the Minipirates, who put him ashore where he begins Life #2.

Life #2 with the Hobgoblins gets a little weird, becuase they're all about his emotions- especially the crying, which elevates him to superstardom amongst them. Eventually he gets weirded out and repulsed by this and builds a raft and puts out to sea again, where begins Life #3, where he meets the Babbling Billows which teach him to speak and has other adventures before he gets to the mysterious Gourmet Island and Life #4. Life 4 is all about Gourmet Island, which is full of naturally growing delicious foodstuffs and Bluebear becomes enormously fat untill he realizes that the island itself is a carnivorous monster who lures it's prey to their doom by fattening them up with all the food they could possibly eat. He is rescued from the monster's clutches by a Reptilian Rescuer named Mac, one of a breed of pterodactyls that fly around and save people at the last minute.

Bluebear spends a year with Mac as his navigator (Life #5) before Mac retires and drops him at the entrance to the Nocturnal Academy deep in the Gloomberg Mountains where he'll learn all the knowledge in the universe from the seven-brained Nocturnomath Professor Abdullan Nightingale (Life #6). There he meets his fellow students that show up in subsequent lives- Qwerty Uiop from another dimension, Fredda the Alpine Imp and Knio the Barbaric Hog and Weeny the Gnomelet. Eventually Bluebear has learned all he can and graduates- eventually navigating his way past the sneaky Troglotroll and with the help of a Mountain Maggot he finds his way through the Labyrinth and out of the mountains and into Life #7.

In Life #7, Bluebear finds himself in the Great Forest and finds a blue she-bear there, despite the unnatural silence of the place and falls in love with her. Eventually, he realizes that she was an illusion spun by the gigantic Spiderwitch designed (yet again) to entrap him- he frees himself just in time and begans a marathon run through the Great Forest trying to evade it and just as he is about to collapse from exhaustion, he trips and falls through a dimensional hiatus and into Life #8.

Life #8 is pretty short. It pretty much reveals to Bluebear that he is responsible for starting the sequence of events that caused his friend Qwerty Uiop to fall into our world to begin with. Bluebear realizes this and tries to save Qwerty and jumps after him into the dimensional hiatus and back into our world, where the Spiderwitch is nowhere to be seen.

Life #9, Bluebear decides to go to Atlantis, but as to trek across the Demerara Desert to get there. He falls in with the nomadic Muggs, who are searching for their fabled city of Anagrom Ataf. He helps them find the mirage city and captures it- but it's already inhabited by ghostly Fatoms who don't really want to share the city with the Muggs so with some creativity, Bluebear sets the Muggs wandering again, looking for Esidarap S'loof- another lost city that doesn't actually exist. Leaving their company to head to Atlantis, Bluebear finds a Tornado Stop and waits there to catch a ride on the tornado to Atlantis- but gets sucked into the center of the Tornado and aged about 80 years for his troubles instead and that leads us to Life #10.

Life #10, Bluebear meets the other elderly denizens and adventurers of Tornado City and finds the man responsible for the strange laws of the Muggs and their search for Anagrom Ataf- and eventually figures out a way to get out of Tornado City which leans him to Life #11 and that's where he travels through the discarded head of a gigantic Megabollog on his way to Atlantis- and Bluebear gets through the head and out the otherside just in time-- the enormous cyclops comes blundering back to retrieve it's head.

Life #12 details Bluebears adventures in Atlantis and finally, Life #13 sees Bluebear placed aboard the mysterious ship the Moloch, where he is enslaved by the only thinking element in the universe, the evil Zamonium- a final showdown occurs and soon Bluebear is not only rescued but finds others of his kind- chromobears and they set up a new life in the Great Forest for themselves, and in his 1/2 life, Bluebear meets a she-bear identical to the one he hallucinated in Life #7 and starts a new life with her, but hints that more adventures await them in the future.

Okay, this is a long-ass book- I'll just get that right out of the way first. Part of it are absolutely interminable- but, I would say around Life #6 or Life #7, the adventures get deeper and more complex. The characters begin to grow on you and despite a few of the more annoying things (whole pages of encrypted nonsense debates. The numbers involved in counting down backwards from a year down to the minute to escape a Tornado. The impossibility of saying the 2364th Dimension way too many times out loud), the book gradually begins to charm you. By the time you really get to the end, you're invested in these adventures whether you want to be or not and the ending is satisfying indeed.

The obvious comparison here is to the Hitch-hikers Guide To The Galaxy-- that damned encyclopedia that gets stuck in Bluebear's head (The Encyclopedia of Marvels and Other Phenomena of Zamonia by Professor Abdullah Nightingale are words that I had to read way too many times) but there's a sort of sweet whimsy and fantastic imagination to the world of Zamonia that Moers has built. Despite some dreadfully long and interminable sequences it's an adventure worth sticking with to the end. My Grade: ** 1/2 out of ****