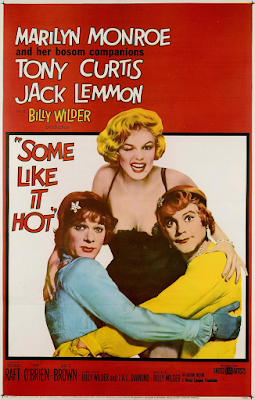 So I was searching for inspiration yesterday at work and tripped and fell down a rabbit hole of articles listing the 100 Best Movies on Netflix, then Amazon Prime and finally Hulu. And, on a whim- having decided that Aguirre, The Wrath of God would be a little too heavy for a Saturday afternoon, I went with another cinema classic: Some Like It Hot.

I'll be the first to admit that I'm not a huge cinema buff. I watch movies and over the years I've found 'classics' that just blow me away and that I currently own, somewhere. (Lawrence of Arabia, The Lion In Winter- Gandhi, if you want to count that one.) But when faced with a choice of ingesting the classics or watching whatever I feel like, I'm usually one to follow my Id and just watch what I feel like. Why then this sudden turn to classic cinema? I couldn't tell you-- I knew the basic outline of Some Like It Hot, but I'd never actually seen it. So I figured- why the heck not?

Turns out, it more than lives up to it's reputation.

The movie opens in February of 1929, Prohibition-era Chicago. Joe (Tony Curtis) and Jerry (Jack Lemmon) are musicians that work in a speakeasy owned by local gangster Spats Colombo (George Raft). When an informant tips off the police as to the true nature of the 'funeral parlor' they launch a raid and Joe and Jerry barely dodge the cops, but escape. (Along with a panicked stampede of dancing girls, patrons and a drunk fellow who keeps insisting that 'he wants another cup of coffee.')

The problems for the duo only increase, as they then witness Spats take revenge on the informant and his own gang. Poor and ready to get out of a brutal Chicago winter. (I've been to Chicago in the winter before and props to Director Billy Wilder on this one, because he captures it more or less perfectly.) Joe and Jerry head to the local music agent complex, looking for a gig. They're tricked by a secretary Joe has stood up to go in and ask for a gig in Miami, not realizing that it's an all-female band. Faced with a choice between a lower-paying gig in Urbana and needing to get out of town, they disguise themselves as women (Josephine and Daphne) and join Sweet Sue and her Society Syncopaters on the train to Miami.

On board, they meet Sugar Kane (Marilyn Monroe), the band's vocalist and ukulele player. Both men become obsessed with Sugar and try and compete for her affections while maintaining their disguises. Sugar confides to Joe (the sax player) that she's sworn off male saxophone players, who've stolen her heart and left her with 'the fuzzy end of the lollipop' and she wants to find a nice, millionaire with glasses in Florida. They both party and become closer to Sugar as they make their way down to Miami, but struggle to remember that they're girls and can't hit on her.

Once in Miami, Joe gets creative and finds a second disguise as a millionaire (Shell Oil Jr.) and woos Sugar by being standoffish and spurning here. Jerry gets his own suitor, however, in the form of Osgood- an actual millionaire with a yacht. Soon, Joe and Sugar are sneaking aboard Osgood's yacht, where Joe claims that a woman broke his heart and left him broken downstairs and he's not sure he'll ever find a woman who can fix him. Sugar, of course, does her best to try.  Jerry and Osgood dance the night away and when Joe returns back to the room, he finds that Jerry has accepted a marriage proposal from Osgood and is angling for a quickie divorce and a cash settlement once his real identity is discovered. Joe points out that he can't actually marry Osgood and Jerry reluctantly agrees.

But, before the two can flee- the mobsters find them. Turns out 'The Italian Opera Society' is having their national convention in town and Jerry and Joe are recognized. Some wacky hijinks ensue and eventually identities are revealed. Sugar doesn't care that Joe doesn't have money, she loves him anyway. Jerry tells Osgood that they can't get married and takes off his wig to prove that he's a man. Osgood just shrugs and says, "Well, nobody's perfect."

Overall, this is a great movie. Tony Curtis and Jack Lemmon pull off drag beautifully- and manage to walk credibly in heels to boot. I've always been a sucker for a good farce/comedy of errors, so this movie was just about perfect in terms of comedic timing and the set pieces. Happily, with marriage equality being a thing now and the culture changing so drastically in the decades since it was made, I don't think this is a movie that Hollywood can screw up by dragging into the present day and rebooting anytime soon. Leave it as it is, a comedy and cinematic classic. My Grade: **** out of ****