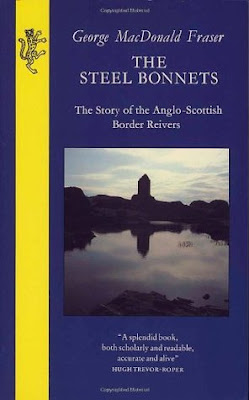 It's been gathering dust on my bookshelf for years, but finally, I sat down and read The Steel Bonnets, which tells the story of the border reivers that dominated the border between England and Scotland for centuries- their peculiar, rough and tumble way of life reached it's peak in the 16th Century before being swept aside by the forces of political unification that united the two kingdoms when James I took the throne of a united kingdom following the death of Elizabeth I.

Why read a book about what to many would seem to be a relatively obscure subject? Well, it's sort of where my people are from. The Nixons ran along the Middle March of the border with the Armstrongs- but also mixing with the Elliots and Croziers as well. As the borders grew more wild and unruly over the centuries- the clans developed sort of a rough code that sort of governed their raids- and every cross border raid to steal horses or rustle sheep would provoke a response in one form or another. They were horsemen without peer, somee of them would probably be considered criminal masterminds by today's standards.

Both England and Scotland divided their respective sides of the border into marches: the west march, middle march and east march.  Each march had it's own warden and together- when they were getting in on the action of raiding and reiving themselves, they would coordinate in keep some semblance of order in both sides of the border. They would meet in appointed places and times to settle claims that people had on folks from the opposite side of the border- these 'Days of Truce' came to be large gatherings, almost fairs and folks from either sides of the border could meet with relatives/friends/family they didn't normally get to see because of being on the opposite side of the border-- the 'Days of Truce' were most inviolate, but violence did break out at some of the Truce Days now and again as well.

Probably the most famous raid of them all was the raid that broke Kinmont Willie Armstrong out of Carlisle Castle itself, which at the time was considered damn near impregnable-- it sent Kinmont Willie into the realms of legend and songs are still sun about him today. In fact, a quick check of the Googles and YouTubes will find you a veritable catalogue of border ballads, songs and poetry. They were the inspiration for a lot of the works of Sir Walter Scott.

The politics of the 16th Century also saw the borders getting caught in the middle. In the various conflicts between England and Scotland over the course of the century or two prior to the union of crowns, borderers served in both armies and occasionally would see each other on opposite sides of the battle and were pretty open about saying 'hello' to one another when they saw each other.

Fraser (who was screenwriter on one of the most underrated Bond movies, Octopussy) obviously knows his material and knows it well. This book feels like it's meticulously researched- but it also probably helps that Fraser himself knows the area and knows it well. He describes the landscape in such detail that you know he spent extensive time travelling the region and learning it's history in person, which lends the overall narrative an air of authenticity that just makes the book that much better.

Between the history of the border, Fraser also takes the time to explain the rules and customs of the border as well as trying to give the reader an idea of how ordinary life looked for everyday borderers. What results is a remarkably complete portrait of a land and it's people and it was a great read that helped me feel a little more connected to my own family roots. My Grade: **** out of ****