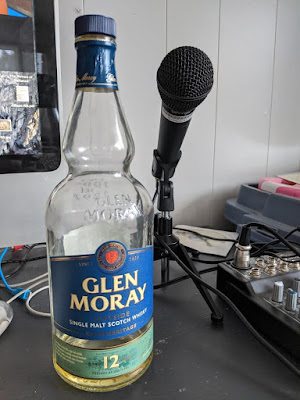 So, before we get into the nitty-gritty of the Glen Moray 12-Year-Old Single Malt, I suppose I should digress a little and explain what I'm going to do going forward with this feature. A couple of birthdays ago, the Missus got me a set of Tiki Glasses. She then followed that up with Smuggler's Cove an excellent bible on all things Tiki (if perhaps slightly unhelpful for beginners in the Tiki Life). I've sort of decided to mitosis this feature up. Going forward, you should expect to see some Tiki-specific posts, some cocktail related posts and some straight-up reviews of bottles of whiskey and other goodies I pick up along the way.

As part of my general and annual New Year's Goal for better health, I'm going to be cutting back on my alcohol consumption as well. I used to be pretty good about only having a wee dram or a cocktail on my days off. That has turned into damn near a nightly thing, which isn't bad, per say- but it's also more booze than I wanna drink- especially if I'm trying to lose weight and generally speaking, be healthier. I haven't locked in my 'limits' yet- I'm torn between my days off and just straight up weekends- but there will be something.

This bad boy was a birthday present last year and it's been pretty damn drinkable. As you'll see below, the nose gave me the most trouble on htis one. (In this case, the nose perhaps didn't quite know- but I feel like I did a good job.) Speyside Malts (I thought this was my first, but it's not) tend to lean more toward descriptions of frutiness and I tried, y'all, but I just couldn't get frutiness out of this one. The actual tasting notes off of the website are here- my own are below. I feel like I was onto something with the whole 'freshly-cut' thing- but I was thinking grass and not herbs.

Here's my take on it:

Color: Medium gold/honey shades. Not straw colored, but not deep enough to be ambeer.

Nose: This was the hardest part of the whiskey to break down. It was...  unique. I don't want to say weird, because I don't want give you the impression that it's somehow bad- it's not. I just couldn't quite nail it down- and eventually landed on 'freshly cut grass' and a spice of some kind, possibly pepper.

Finish: Immediate spice and then a little bit of burn and it fades to a nice glow.

Overall: Very drinkable! As you can tell by the picture, I went through it pretty damn fast. If there's a word to describe this scotch, I'd say 'solid.' It's very smooth, very drinkable- but if you're looking for an adventure or something to surprise you, maybe try something else. My Grade: B+