Squawk Box: Four Weddings And A Funeral/This Is Football 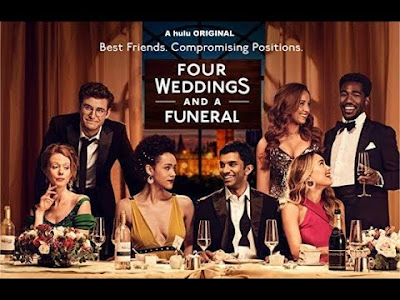 The concept of Four Weddings And A Funeral immediately intrigued me. Mindy Kaling and Richard Curtis are amongst the producers- Curtis wrote the original movie and Kaling has a pretty good track record when it comes to rom coms- it's obvious she appreciates the genre enough to bring out the best in them (charm, chemistry and genuine romance) while at the same time tweaking the many lamentable tropes that you tend to find in rom-coms and freshening them up for a contemporary audience.
And yet...  the movie version of Four Weddings And A Funeral isn't just a classic rom-com, it's a genuinely great movie all by itself. Hugh Grant, Andie MacDowell, John Hannah, Kristin Scott Thomas, Rowan Atkinson- I mean, it's an incredible cast which takes that movie to another level. Taking any movie and translating that into television has proven to be something of a mixed back. Taking a great movie and translating into television- even if it is 'The Golden Age of Television' that's...  intriguing. Maybe even ambitious- the real question is: does it work?

I think it does and more importantly, it works surprisingly well. The show opens with four American friends from college reuniting in London for the fabulous wedding of one of the friends, Ainsley. (Rebecca Rittenhouse). Maya (Nathalie Emmanuel), her best friend and college roommate is leaving behind romantic problems of her own- she's a political speecherwriter who is sleeping with her married boss and candidate for Senate, Ted Spencer. She arrives in London and promptly loses her bag and is helped out by mysterious stranger Kash (Nikesh Patel) with whom she has instant chemistry and learns that he hates his job and has always wanted to be an actor. Bag located, she heads off to meet up with her other friends: Ainsly, Craig (Brandon Mychal Smith) and Duffy (John Reynolds) and they head to a party where Maya finds out that the mysterious stranger Kash is actually Ainsley's fiance.

In short order, Kash leaves Ainsley at the altar (That's one wedding.). Maya's relationship with her boss is exposed and she further discovers that she is not the only person he's been sleeping with and ends the relationship to move back to London to be with Ainsley. In the meantime, Craig discovers that he has a daughter he didn't know he had- but keeps that secret from his girlfriend Zara (Sophia La Porta) and Duffy decides that he might actually tell Maya about his unrequited love for her but ultimately doesn't- at least not at first. There's also some tension between Maya and Ainsley British BFF Gemma (Zoe Boyle) who might be my favortite character on the whole show because she comes across as cold and very uptight at first (perhaps, one might say, stereotypically British) but as you get to know her, you find out about her life and her marriage and she becomes an entirely different character.

Craig's secret is eventually revealed and Zara leaves him for it and Kash, in an effort to avoid Maya begins dating Fatima (Rakhee Thakrar) using the Imam down at his local mosque with Fatima's grandmother and Kash's friend Basheer (Guz Khan) acting as their chaperone. Ainsley for her part begins to move on finding romance again with a recently divorced fellow Texan, Bryce (Dermot Mulroney.) And soon, despite the rather obvious funeral, you're lefting wondering just what the other three weddings are going to be and the answer to that question is pretty surprising, I think.

Can you find things to criticize about this show? Absolutely. There's a few fairly obvious references to Love Actually and an out and out damn near shot for shot remake of a scene from Notting Hill-- I think both are meant to be homages but come across as kind of lazy writing, to me. If you're cynical and a little jaded about love and romantic comedies you might also find this somewhat predictable in parts. However, I am not cynical and jaded about romantic comedies and I found the whole damn thing entertaining and charming. Not gonna lie, it got a little dusty in our living room a few points along the way. But if you're looking for comfort food television that's charming and entertaining, you can't go wrong with Four Weddings And A Funeral. My Grade: **** out of ****

Switching gears a bit, I tripped and fell headlong into yet another soccer documentary I came across on Amazon Prime. (One of those days I'll finish the Man City one, I promise.) This Is Football is a six episode journey through the beautiful game that takes you places that fans will recognize and some they won't and because it's Amazon, it's well produced and looks amazing. Each episode is centered around a 'theme' of sorts. The first episode, 'Redemption' centers around a group of Liverpool fans from Rwanda who all turn out to be survivors of the 1994 genocide who rebuilt their lives and healed some wounds in their nation through soccer- that got me hooked. 'Belief' tells the story of the Japanese women's football who won the World Cup just three months after the earthquake and tsunami killed 16,000 people in Japan and also tells the story how the game took off in America during hte 1999 Women's World Cup. 'Pride' looks at Iceland and it's emergence onto the World stage first at the European Championships and then at the World Cup.

The other three episodes are probably the most interesting of the bunch: 'Chance' looks at the fortunes of Bayern Munich and their dominance but it also told the story of Chelsea's run to the 2012 Champions League title and Frankfurt winning their first cup in 30 years- which was an awesome story to see. 'Love' introduces the viewer to blind football- which is a permutation of the sport I was unaware of- but also tells the story of South Africa's youngest referee and the rooftop football of China.

The last episode, 'Wonder' is obviously reserved for the titan of the game, Lionel Messi. My personal view on Messi has shifted a lot over the years for a very long time I felt like if he wanted to be the greatest player in the world, he'd need to win at least one World Cup for Argentina. That view sort of ignored the difference between club level football and international football- so it wasn't exactly the most intelligent of takes at the time- but now, having seen him in World Cups and watched an episode that tries to crack the code on how he does what he does I think I've flipped even further: Messi is Picasso and Argentina's Football Association has absolutely wasted his prime. Like LeBron James who put the Cavs on his back and carried a team made up off scotch tape, bailing wire and not much else to the NBA Finals,  the very fact that Messi can put a team on his back and get them to a World Cup Final is a staggering achievement in and of itself. Honestly, in 2014 I just felt sorry for him. He got Argentina to the mountaintop and they flopped. His failure to win a World Cup is absolutely not on him-- and honestly, while he's Picasso- those expectations are crushing and then add the weight of a nation on top of that and it's a wonder he still plays at all really. (Though I loved that the interviewed the President of Argentina and you gotta wonder what it's like to be the President of a country and not amongst the most important people in your country.)

Overall, it's an Amazon Prime sports documentary: you can't really go wrong with them- at least not so far. My Grade: **** out of ****