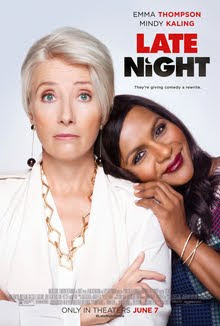 So I first heard about this movie way back in like January/February or so when it debuted at Sundance and got some buzz. Amazon snatched it up and I think it did a theatrical run for a bit, but it's finally on Prime Video. Now, I had heard mixed things about it- which surprised me, because Mindy Kaling is funny and Emma Thompson is awesome- and there's John Lithgow knocking around this movie as well, so who can beat that? But a lot of the reviews seemed fairly 'meh' which is kind of surprising given the Rotten Tomatoes score.

But, I guess I was reading the wrong reviews, because this was actually a really good movie.

Emma Thompson stars as Katerine Newbury, an acclaimed comic and light night comedian who's been doing it forever, but her show's ratings have declined steadily over the course of the past ten years. The new president of the network, Caroline Morton (Amy Ryan) tells her that unless she fixes her show and makes it relevant again, she'll be replaced. In an attempt to revamp the show, she hires Molly Patel (Mindy Kaling) to her all male writing staff, who has little experience in comedy and no experience in television and struggles at first before giving Katherine good material to work with on her show and helping her expand her audience as well.

When Katherine learns that their efforts have not been enough and the network wants to bring in popular comedian Daniel Tennant (Ike Barinholtz) to replace her she resists because his comedy is vulgar and misogynistic- she ends up defying the network's demands and deciding on air to continue her career. Unfortunately, just as things seem like they're falling Katherine's way, an email from one of the writers, Charlie (Hugh Dancy) gets leaked which reveals a brief affair the two had shortly after her husband Walter was diagnosed with Parkinson's disease. Katherine doesn't take the news well and actually fires Molly who calls her out for her reaction to it.

Instead of giving up, however, she makes amends with Walter and the other writers, admits her affair to her audience and her sincerity and belief in the excellence of the show convinces Caroline to keep her around. She even apologizes to Molly and hires her back. A year later and the writing team has grown and diversified- Molly's been promoted to co-lead monologue writer and her show is still going strong.

I'm a sucker for any good behind the scenes workplace drama/comedy, so I was already going to be down for this movie- but Thompson and Kaling actually anchor it with performances rooted in very different expreiences for contemporary women. Thompson's character has been career driven and reaped the benefits of that- but all she's got is her show and her husband and they want to take away the show and she made a mistake that damaged her marriage and she's getting older and Hollywood's bullshit standards are closing in. Kaling is a young woman just trying to break into the field- and she's a woman of color to boot, so that adds an extra dimension to her character as well. The contrast between two women at the opposite end of their respective career spectrums is the heart of the movie and it's a dynamic that really works, I think.

Thompson's performance is excellent-- her shock as she realizes that she's not as good as she used to be and deciding to do something about it make for an interesting character arc-- but she's charming and funny and even if she is something of a cruel boss now and again, she has this obsessive care about the show- not necessarily herself or even her career, but the show that gives her something of a human touch, strangely enough. Her sign off has always been 'I hope I've earned the privelege of your time' and as the movie goes on, it's great to watch her fight to get back to making that statement true.

Overall: Charming, funny and a great cast this movie was excellent. If you've heard it's kind of 'meh' you've heard wrong. Worth a watch if you're poking around on Prime and looking for a movie to get into. My Grade: **** out of ****