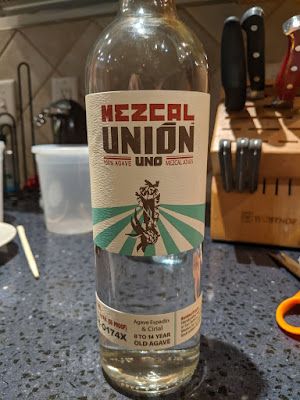 All right, I've drunk a lot of scotch over the years and if you drink enough scotch- especially Islays, sooner or later you're going to hear tantalizing things about Mezcal. "It's not like tequila," people will tell you, "it's smoky." Round these parts, mezcal seems to be hard to find- to be fair to any local mezcal that might gathering dust on local liquor store shelves I didn't launch into a full scale Mezcal Quest to make a comprehensive survey of what's around here. In general, unless I'm after something very specific, I don't do that. It's what I see on my liquor store aisle shelves that I go for- because if I can find it, then y'all can too- and when it comes to Mezcal there's not a lot out there that gets picked up by the casual eye.

Before we get into the mezcal I actually tried- we've gotta take a minute to talk about what Mezcal actually is. Unlike tequila- which is made from blue agave in the area around the city of Tequila in Jalisco, mezcal is made from any type of agave. It's primarily made in Oaxaca (but Durango, Guanajuato, Guerrero, San Luis Potosi, Tamaulipas, Zacatecas, Michoacan, and Puebla also get in on the action as well.) If there was a precursor to mezcal before the Spanish conquest, it's unknown/lost to history, but it was the Spanish who started playing around with the agave plant to see if they could make a fermented mash out of it to distill-  turns out they could and that's how we got mezcal.

Today, the production techniques remain much the same as they were 200 years ago- they still use the pina, the heart of the agave plant and roasted, which I'm assuming is what imparts the smokiness to the finished product. This is all in contrast to tequila, which nowadays is produced industrially- and it also endears mezcal to me almost immediately. I love the small scale, handcrafted nature of how it's made. I love the history behind it- I love that it's made in much the same way it was 200 years ago. It's all just awesome. Granted, my experience with mezcal is pretty limited at this point, but to be honest, I want to find more. I want to explore it more. I want to drink more.

So the bottle I found Mezcal Union came back with me from Waco,TX. I was on the hunt for some Balcones Baby Blue at the time, but while I was in there- I sort of thought, "hey, I wonder what their mezcal selection is like" was pleased to find that it was pretty damn extensive- which hey, made sense to me because our proximity to Mexico proper. I grabbed a bottle to go along with my whiskey, and on we went with our vacation. A brief search of the old Googles came up with something awesome about Mezcal Union- a nice profile from a website called The Manual which revealed that Mezcal Union is targetting the greatly unemployed states of Chiapas, Guerrero, Vera Cruz and Oaxaca. and offering a stake in land and a share in the profits. Y'all: this is a liquor I am proud to drink from a company who is doing it right. (There's also great videos on their website about their origins and methods of production.)

In short, my first introduction to Mezcal has been a great experience so far. So, let's talk some tasting notes- and it's worth noting that this is my first tasting of mezcal, so I have no idea if I'm doing this right or not:

Nose: There's a smokiness to it that almost makes you think it's going have the robust body of like an Islay or something-- but it ends up being incredibly subtle which is a nice surprise. This stuff doesn't hit you in the face. Along with the smoke though, there's kind of an undertone to the nose that reminds me of grappa as well-- though again, grappa is like a kick in the face in many ways. This is not that at all.

Body: Spicy with just a touch of smoke. Well balanced, it's on the lighter side of things without being too watery.

Finish: Very pleasant and warming, not at all harsh.

Overall: My first experience with Mezcal has been excellent. Don't know if that's just me lucking out and finding a really quality bottle of it or if it's just the nature of the spirit itself- either way, I can highly reccommend finding a good bottle to sip on now and again if you're looking to shake things up a bit.