Merrily We Roll Along 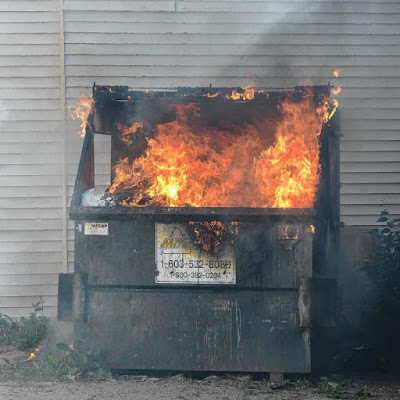 'Boyhood' Director Richard Linklater has signed on to direct a movie adaptation of the musical 'Merrily We Roll Along' which prior to today I don't think I'd ever heard of- except perhaps in a passing reference in an episode of The West Wing or Gilmore Girls. There's a catch though: it's going to take him 20 years to film.  If this seems like an odd way to segue into some more thoughts about Brexit, forgive me- but at this point, 'Merrily We Roll Along' seems like a deeply ironic sentiment to apply to the current political dumpster fire underway in the United Kingdom. And it may well take them twenty years to resolve, at this rate.

But congratulations though! I didn't think anyone could top the current dumpster fire that is the politics of our United States, but the UK has somehow managed it.

So where are we?

There's a joke that I think showed up on an episode of The Newsroom of all places about Jesus and Moses are playing golf. It's not particularly applicable to any of this, but the punch line is: "Moses looks at Jesus and says "Do you wanna play golf?... or do you wanna fuck around?" And like him or hate him, fair play to Boris Johnson: he's not fucking around. He wants a deal, but if the EU isn't going to pony up with a good deal, he's prepared to leave without one. He told the Tory rebels in his own party that if the voted against the government, they'd have the whip removed- and he's followed through on that threat as of tonight for at least 21 of them I've seen so far. He's made it plain that he doesn't want an election, but he's also not about to hand control of his government's negotiations over to Parliament as a whole-- whether it's because he views them (rightly) as the opposition and therefore not in government- or because Parliament has a whole has been dithering about what to do about Brexit for nearly three years now with no clear consensus I don't know- but if that's his option, I'd go for the election as well.

The problem I'm seeing is that he needs a 2/3rds majority to trigger an election, which is a massively idiotic new law passed by Mr. David Cameron, whose name deserves to live forever in perfidy for starting this hideous shit heap of a slow motion trainwreck. And Labour don't want to go for an election until No Deal has been explicitly ruled out in law.

So, what's going to happen?

I haven't the faintest idea. The Conservatives have a healthy poll lead. They've been forthright, they've been direct, they've been pretty damn clear that they'd like a deal but they're not going to stay around and beg for table scraps if the EU doesn't want to play and Boris hung his Premiership on getting this nightmare overwith by October 31st. If voters agree, he could get the majority he needs and game set match.

But Labour...  dear God, Labour. Labour is in a muddle and a half- and it's a situation that I suspect that the Democratic Party might find itself in next year as they head into the primary season. Labour can't explicitly back Remain. But it also doesn't want a No Deal either. It's really got to have it's cake and eat it too, which is why I expect Corbyn wants No Deal ruled out explicitly in law before an election. It would not shock me if the bill to rule out a No Deal goes down and then Labour is in a real pickle. I suspect they're in a pickle either way- but if they can't go to the country with a clear, forthright and ultimately sensible position, I don't think they're going to get a majority either.

So, qui bono? The Liberal Democrats, the Greens and the SNP. The Lib Dems have been consistently Remain from the start and I think voters are rewarding their consistencty- which should have sent a big ass message to Labour to get it's act together and pick a position, but that doesn't appear to have happened. But the problem there is, barring a massive political earthquake of some kind, I don't see them getting a majority either.

The Brexit Party also complicates things-- I would imagine, but I don't know, that there will be some quiet discussions between the Conservative Party and The Brexit Party- all of which could lead to Nigel Farage getting somewhere close to power as a Kingmaker of sorts, which I don't think Boris wants.

I see a lot of people on Twitter very happy tonight, but they really shouldn't be. If there is an election and the chaos in Parliament is merely a reflection of the wider British electorate being equally as chaotic in their views, then nothing will change. There's no guarantee a pro-Leave or a pro-Remain bloc will get a solid majority either.  Remainers could sweep to power and provide clarity. Leavers could get the majority they need to get it over the finish line and end this once and for all.

So, merrily we roll along... now pass the marshmallows. Let's make smores.