This Week In Vexillology #209

April 15, 2017
You know, the calendar has been good to me these past few weeks and while This Week In Vexillology is technically another 'Lost Week In Vexillology' the timing couldn't be more perfect- because we're heading back to the Island of Malta to take a peek at their flag, which features The George Cross, which was awarded to Malta by King George VI 75 years ago today. (Malta's been in the news, with the sad, tragic collapse of the Azure Window.) 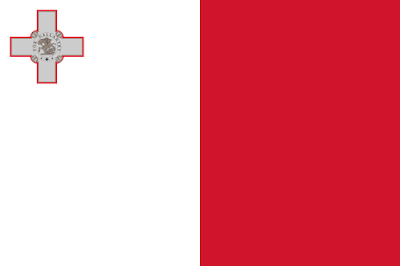 Adopted on September 21st, 1964 as the national flag as well as the state and naval ensign. The cross used to be in a blue canton, but that was removed in 1964 and a red fimbriation was added around the Cross to help make it appear less prominent. Interestingly enough it also helped the flag to conform to a rule of heraldry which states: "no color may touch a color, or metal touch a metal" The metals in this case being silver/white and yellow/gold. (I clicked the wiki-link to check out heraldry, hoping that there would be a nice user's guide/list of rules, but nooooooooo...  and hey, guess what- note to self: learn something about heraldry.)

So, what's the colors about? Well, there are two possible origins. The more mythological one dates back to 1090 when King Roger I of Sicily landed there and the local populace offered to help him fight the Arab defenders of the Island and he was so pleased, he tore off a chunk of his chequered red-and-white flag. But that story, charming as it is, was debunked as a 19th Century myth. The real and more prosaic explanation is that the flag of the Knights of Malta featured a white cross on a red field and that sort of carried over into the British colonial period and into the present day.

And that's the flag of Malta! Remember, until next time keep your flags flying- FREAK or otherwise!